How to Be a Victorian: A Dawn-to-Dusk Guide to Victorian Life (Paperback) 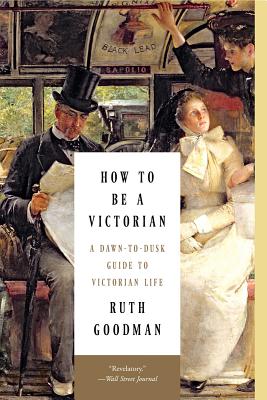 How to Be a Victorian: A Dawn-to-Dusk Guide to Victorian Life (Paperback)

Named one of the Best Books of the Year by NPR

A “revelatory” (Wall Street Journal) romp through the intimate details of Victorian life, by an historian who has cheerfully endured them all.

Lauded by critics, How to Be a Victorian is an enchanting manual for the insatiably curious, the “the cheapest time-travel machine you’ll find” (NPR). Readers have fallen in love with Ruth Goodman, an historian who believes in getting her hands dirty. Drawing on her own firsthand adventures living in re-created Victorian conditions, Goodman serves as our bustling guide to nineteenth-century life. Proceeding from daybreak to bedtime, this charming, illustrative work “imagines the Victorians as intrepid survivors” (New Republic) of the most perennially fascinating era of British history. From lacing into a corset after a round of calisthenics to slipping opium to the little ones, Goodman’s account of Victorian life “makes you feel as if you could pass as a native” (The New Yorker).

Ruth Goodman is the author of multiple books including How to Be a Victorian. An historian of British life, she has presented a number of BBC television series, including Tudor Monastery Farm. She lives in the United Kingdom.
Delightful.
— Seattle Times

Goodman’s impeccably researched account will raise readers’ eyebrows with her adventures “living history”… [Her] charming guide richly illustrates what daily life was like for common people undergoing the massive social changes of the time and succeeds in presenting “a more intimate, personal and physical sort of history."
— Publishers Weekly, Starred review

If the past is a foreign country because they do things differently there, we’re lucky to have such a knowledgeable cicerone as Ruth Goodman…. Goodman’s fascination with the objects of the past doesn’t lead her to fetishize or romanticize them. She is admirably matter-of-fact…. Revelatory.
— Alexandra Kimball - Wall Street Journal

[E]ntertaining… Goodman mixes historical context with technical know-how; in addition to explaining why women wore corsets she tries wearing—and even making—one herself… [T]he book’s accumulation of detail on matters as diverse as purchasing a ticket for the new underground railway, administering an opium-based tonic to a baby, and signaling interest in a homosexual affair makes you feel as if you could pass as a native.
— The New Yorker

Goodman’s research is impeccable, and she attacks the topic with gusto, taking the reader through an average day and presenting the oddities of life without condescension… Although the book lends itself to being read in segments, I read it straight through like a novel, panting to know what would happen next.
— Patricia Hagen - Minneapolis Star Tribune

[A] witty account of life during the monarch’s reign… [Goodman’s] interest in historical accuracy leads her to experiment with corsets and home cures. Research for the book led her ‘down harrowing avenues of hunger, disease, overwork, and abuse.’ Among the most upsetting are accounts of small children working harder than most adults do now, sometimes in dangerous and frightening environments, and on empty stomachs. Often a very funny read, the book takes seriously the suffering of these kids and their families.
— Kate Tuttle - Boston Globe