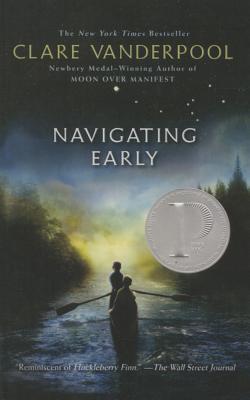 By Clare Vanderpool
Email or call for price
Out of Print, and unable to order.

Just the sort of book that saves lives by igniting a passion for reading. James Patterson
Reminiscent of "Huckleberry Finn." "The Wall Street Journal"
A Michael L. Printz Honor Winner
From the author of Newbery Medal winner "Moon Over Manifest" comes the odyssey-like adventure of two boys incredible quest on the Appalachian Trail.
When Jack Baker's father sends him from his home in Kansas to attend a boys boarding school in Maine, Jack doesn t know what to expect. Certainly not Early Auden, the strangest of boys. Early keeps to himself, reads the number pi as a story, and refuses to accept truths others take for granted. Jack, feeling lonely and out of place, connects with Early, and the two become friends.
During a break from school, the boys set out for the Appalachian Trail on a quest for a great black bear. As Jack and Early travel deeper into the mountains, they meet peculiar and dangerous characters, and they make some shocking discoveries. But their adventure is only just beginning. Will Jack's and Early's friendship last the journey? Can the boys make it home alive?
An ALA Best Fiction for Young Adults Selection
An ALA-ALSC Notable Children's Book
A "New York Times "Editor's Choice
A "New York Times" Bestseller
An Indie Pick
A Bank Street College of Education Best Book of the Year
A" School Library Journal "Best Book of the Year
A "Kirkus" "Reviews" Best Book of the Year
A "Booklist" Books for Youth Editors Choice Selection
A "BookPage" Best Children's Book
A Texas Lone Star Reading List Selection
A Notable Children's Book in Language Arts Book
A "Down East Magazine" Best of Maine Book
A North Carolina Young Adult Book Award Master List Selection
An Iowa Children's Choice Award Finalist

CLARE VANDERPOOL's debut novel, "Moon Over Manifest, " won the 2011 Newbery Medal for the most distinguished contribution to children's literature. This second novel will continue to astound readers with Clare's incredible writing prowess.