A Declaration of Independents: How We Can Break the Two-Party Stranglehold and Restore the American Dream (Hardcover) 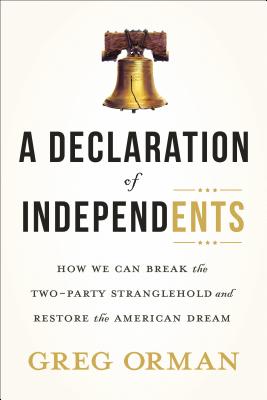 A Declaration of Independents: How We Can Break the Two-Party Stranglehold and Restore the American Dream (Hardcover)

In 2014, Greg Orman made headlines with his historic Independent run for the U.S. Senate in Kansas. Voters gravitated to Orman's campaign in unprecedented numbers, challenging the entrenched dominance of the two major parties over American politics. In "A Declaration of Independents" Orman describes how hyper-partisanship, division, and a win-at-all-costs environment in Washington have created a toxic culture of self-interest that has left average Americans behind. Orman makes a persuasive case that without fundamental change, our standard of living, our status in the world, and the very existence of the middle class are at risk. His withering critique of our ruling partisan duopoly explains why voters are choosing unconventional candidates in increasing numbers from his own 2014 Senate race to the nation's 2016 presidential campaign. Taking direct aim at the corrupt practices that keep the two parties in power despite historically low approval ratings, Orman argues convincingly that the system is rigged for the benefit of special interests who buy access to power. Drawing on his own journey to political independence, Orman lays out a plan for taking back our government by rejecting party politics and embracing a new Independent approach.

Greg Orman is a Kansas businessman who ran as an Independent candidate for the U.S. Senate in 2014. His historic run for the Senate against a three-term Republican incumbent brought an unprecedented amount of attention not only to Kansas, but to the modern election process itself. Referred to by NBC News as The Most Interesting Man in Politics, Orman had the Washington establishment on the run during his insurgent Independent campaign. The Republican Party was required to mobilize dozens of national political figures and spend a record amount of money to preserve a seat that had been held by a Republican since 1919. Orman currently runs Exemplar Holdings, LLC, a private company that invests in and actively manages a portfolio of businesses throughout the United States. Orman has built numerous businesses over his twenty-five-year career in industries including energy-efficient technology, recycling, construction, sporting goods, business services, medical devices, specialty manufacturing, and real estate. Orman lives in Olathe, Kansas, with his wife, Sybil, and their daughter, Imogen."