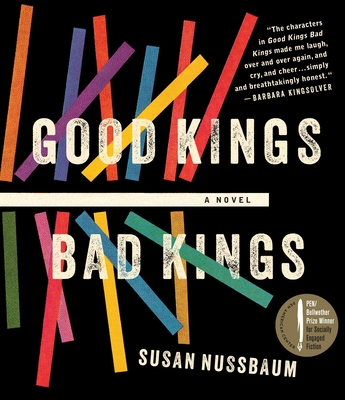 By Susan Nussbaum
$32.95
Temporarily Out of Stock. Usually Ships in 3-5 Days.

“Set in an institution for kids with disabilities, this story unfolds in first-person narratives by the kids themselves as well as some of the adults who work there. Instances of indignity, injustice, and lack of care abound in this important story, but what comes across most powerfully is the complexity and uniqueness of each character. What they have in common on the surface is some form of disability, but what they share more deeply with each other and with the reader is the universal desire for respect, understanding, and the freedom to make their own decisions and manage their own lives. Nussbaum minces no words in exposing harsh realities, but her language for those who struggle, survive, and advocate on behalf of themselves and others is triumphant. In a word - terrific!”
— Ann Christophersen, Women & Children First, Chicago, IL

Told in alternating perspectives by a varied and vocal cast of characters, Nussbaum pulls back the curtain to reveal the complicated and funny and tough life inside the walls of an institution for juveniles with disabilities. From Yessenia Lopez, who dreams of her next boyfriend and of one day of living outside those walls, to Teddy, a resident who dresses up daily in a full suit and tie, to Mia, who guards a terrifying secret, Nussbaum has crafted a multifaceted portrait of a way of life hidden from most of us. In this isolated human warehouse on Chicago’s South Side, friendships are forged, trust is built, and love affairs begin. And it’s in their alliances that the residents ultimately find the strength to bond together and finally fight back against their mistreatment.

Told with humor and authenticity in voices that stay with you long past the last page, Good Kings, Bad Kings is at once strikingly original, baldly funny, and profoundly moving.

Susan Nussbaum’s plays have been widely produced. Her play Mishuganismo is included in the anthology Staring Back: The Disability Experience from the Inside Out. In 2008 she was cited by the Utne Reader as one of “50 Visionaries Who Are Changing Your World” for her work with girls with disabilities. This is her first novel.

“A wonderful vehicle for audio, with engaging, heartrending performances by a talented cast of actors. . . . Enlightening listening.”
—AudioFile

“A compelling and authentic vision of life in facilities for the disabled. . . . Mature young adults will appreciate the journey of these strong young people.”
—Library Journal

“Nussbaum wonderfully sweetens a stark subject with doses of idiosyncratic humor and hard-earned pathos. . . . [She] upholds the individuality and integrity of her characters, never stooping to saccharine clichés or Hollywood manipulation. . . . [A] moving story.”
—Washington Post

“Vividly brought to life by a cast of seven talented performers.”
—Wisconsin Bookwatch

“Good King, Bad Kings has seven narrators who bring their situations to life. Each narrator was carefully selected for his/her skillful, emotional portrayal of the individual’s personality.”
—Sound Commentary