Paul Robeson: No One Can Silence Me: The Life of the Legendary Artist and Activist (Adapted for Young Adults) (Hardcover) 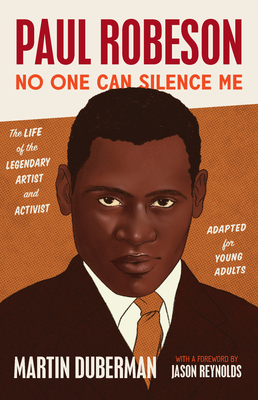 Paul Robeson: No One Can Silence Me: The Life of the Legendary Artist and Activist (Adapted for Young Adults) (Hardcover)

As an artist I come to sing, but as a citizen, I will always speak for peace, and no one can silence me in this. --Paul Robeson

Paul Robeson was destined for greatness. The son of an ex-slave who upon his college graduation ranked first in his class, Robeson was proclaimed the future leader of the colored race in America. Although a graduate of Columbia Law School, he abandoned his law career (and the racism he encountered there) and began a hugely successful career as an internationally celebrated actor and singer. The predictions seemed to have been correct--Paul Robeson's triumphs on the stage earned him esteem among white and Black Americans across the country, although his daring and principled activism eventually made him an outcast from the entertainment industry, and his radical views made many consider him a public enemy.

With the original biography lavishly praised in the Washington Post as enthralling . . . a marvelous story marvelously told, this will be a thrilling new addition to the young adult canon. Featuring contextualizing sidebars, explanations of key terms, and photographs from Paul Robeson's life and times, Paul Robeson: No One Can Silence Me will introduce readers in middle and high school to the inspiring and complicated life of one of America's most fascinating figures, whose story of artistry, heroism, conviction, and conflict is newly relevant today.

Martin Duberman is Distinguished Professor Emeritus of History at the CUNY Graduate Center, where he founded and for a decade directed the Center for Lesbian and Gay Studies. The author of more than twenty books--including Andrea Dworkin, Radical Acts, Waiting to Land, A Saving Remnant, Howard Zinn, The Martin Duberman Reader, and Hold Tight Gently--Duberman has won a Bancroft Prize and been a finalist for both the National Book Award and the Pulitzer Prize. He lives in New York City.