Starting At Zero: His Own Story (Hardcover) 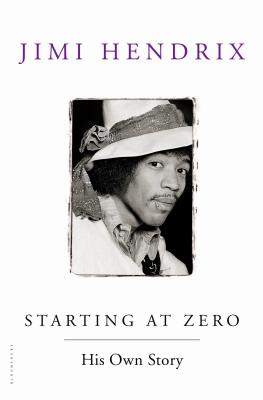 It took just four years in the spotlight for Jimi Hendrix to become an international cultural icon. The sheer impact and originality of his music and his unique mastery of the guitar placed him forever amongst musical giants. But what of the man behind the public image? Modest and intensely private by nature, Jimi was shrouded in intrigue from the moment he first came into the public eye, and the mystery has only grown with time.

Much has been written about him by experts, fans, and critics, some of it true and some of it not. He did, however, leave his own account of himself, locked away like a Chinese puzzle in his many interviews, lyrics, writings, poems, diaries, and even stage raps. Starting at Zero brings all these elements together in narrative form. The result is an intimate, funny, and poetic memoir-one that tells, for the first time, Jimi's own story as only he could tell it.

Alan Douglas was a record producer who produced many of Hendrix's posthumous releases, and a friend and adviser to the musician during his lifetime. He devoted many years to Starting At Zero, and brought it to publication before his death in 2014.

Peter Neal is a documentary film director, whose credits include the 1968 Hendrix short documentary Experience.

“Hendrix's revolutionary music remains potent and compelling more than four decades after his early death, and new material continues to surface, adding dimension to his profound legacy. Documentary filmmaker Neal and record producer Douglas have astutely and seamlessly assembled Hendrix's long-scattered writings into a confiding, funny, and wrenching memoir of a life lived on the edge and passionately devoted to music and freedom. Here is Hendrix unmediated in his caustic wit, anger over prejudice, and belief in the freeing power of the imagination... In thoughtful and expressive letters, lyrics, interviews, and reflections, Hendrix illuminates his dreams, love of science fiction and fairy tales, the stories behind his songs and now-legendary performances, the surreal highs and lows of touring and stardom. Always ahead of the curve, Hendrix wryly pondered death: 'When I die, just keep on playing the records.'” —Donna Seaman, Booklist

“The virtue of this book is its revelation of the restless, curious, creative, self-contradictory mind of a musical genius as he grappled with fame, fellow musicians, inspiration, doubt and life under the competing spotlights of adulation and criticism. A must-read for fans and scholars of classic rock.” —Kirkus