The Little Way of Ruthie Leming: A Southern Girl, a Small Town, and the Secret of a Good Life (CD-Audio) 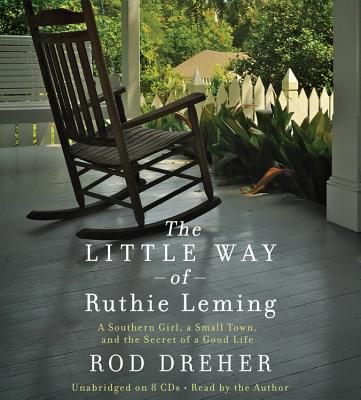 The Little Way of Ruthie Leming follows Rod Dreher, a Philadelphia journalist, back to his hometown of St. Francisville, Louisiana (pop. 1,700) in the wake of his younger sister Ruthie's death. When she was diagnosed at age 40 with a virulent form of cancer in 2010, Dreher was moved by the way the community he had left behind rallied around his dying sister, a schoolteacher. He was also struck by the grace and courage with which his sister dealt with the disease that eventually took her life. In Louisiana for Ruthie's funeral in the fall of 2011, Dreher began to wonder whether the ordinary life Ruthie led in their country town was in fact a path of hidden grandeur, even spiritual greatness, concealed within the modest life of a mother and teacher. In order to explore this revelation, Dreher and his wife decided to leave Philadelphia, move home to help with family responsibilities and have their three children grow up amidst the rituals that had defined his family for five generations-Mardi Gras, L.S.U. football games, and deer hunting.
As David Brooks poignantly described Dreher's journey homeward in a recent New York Times column, Dreher and his wife Julie "decided to accept the limitations of small-town life in exchange for the privilege of being part of a community."

Rod Dreher has been an editorial writer and columnist for the Dallas Morning News, a film critic for the New York Post, and currently writes for the American Conservative. He currently lives in St. Francisville, Louisiana with his wife Julie and his three children.

The Little Way of Ruthie Leming is his second book; his first was Crunchy Cons: How Birkenstocked Burkeans, Gun-Loving Organic Gardeners, Evangelical Free-Range Farmers, Hip Homeschooling Mamas, Right-Wing Nature Lovers, and Their Diverse Tribe of Countercultural Conservatives Plan to Save America (or At Least the Republican Party).