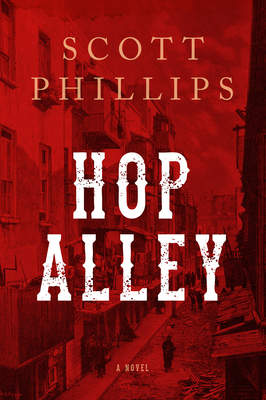 
This book may be unavailable. Please call us for price & availability: (316) 682-1181.
Cottonwood (2004) was a huge step forward for the burgeoning king of noir Scott Phillips, and his dark and gritty take on the western earned him starred reviews and praise from crime masters Michael Connelly and George Pelecanos. That novel featured the Kansas town beginning in 1872 when it was just a small community of run down farms, dusty roads, and two–bit crooks. Saloon owner and photographer Bill Ogden thought it could be more and allied with wealthy developer Marc Leval to capitalize on the advent of the railroad and the cattle trail that soon turned Cottonwood into a wild boomtown. But problems followed the money and soon Bill was confronting both the wicked family of serial killers known as the Bloody Benders as well as his one–time friend Marc, having fallen into an affair with his beautiful wife Maggie. Bill then turned up alone in San Francisco in 1890, having to face a past from which he could not run.

Hop Alley answers all those questions as we return to the Wild West and discover Bill Ogden, now living as Bill Sadlaw, running a photo studio near the Chinese part of town know as Hop Alley in the frontier town of Denver in 1878. Left by Maggie, Bill enjoys an erotic affair with Priscilla, a fallen singer addicted to laudanum, who is also seeing his friend Ralph Banbury, the editor of the local Denver Bulletin (neither man minds sharing). Bill's peaceful time away from Cottonwood turns anything but as he must confront the mysterious murder of his housekeeper's brother–in–law, the increasing instability of Priscilla as both men try to ease out of her clutches, and an all out–riot across Hop Alley. And when the body count starts rising, Bill will soon start wishing he had never left Cottonwood at all.

Hop Alley proves that no one does the Wild West like noir master Scott Phillips.
Scott Phillips is the author of The Ice Harvest, The Walkaway, Cottonwood, The Adjustment, and Rake. He was born and raised in Wichita, Kansas and lived for many years in France. He now lives with his wife and daughter in St. Louis, MO.
Praise for Hop Alley:

"Phillips has a way of writing a bon vivant of the Wild West with testosterone raging without it appearing macho or obnoxious or ego centric. [...] His writing is frank, vivid and hot, but the man is rarely the aggressor. The ladies drop their drawers or veils in an instant in his presence and this is great fun to read. Phillips description is lurid, colorful and powerful. He chooses just the right details and the right amount of details so as not to clutter his sentences which flow tripingly on your tongue. It is a joy to read Phillips." —Huffington Post

"Phillips has a nice touch in using nasty characters as first–person narrators... You can't help thinking that there's a third novel looming, this one set in that city by the bay. Let's hope Phillips spares us from waiting another decade for this book." —The St. Louis Post Dispatch

"Phillips mixes real events, period turns of phrase, a noirish sensibility, and a cast of murderous women, madmen, drunks, grifters, and fools into a wildly entertaining, perhaps sui generis, slumgullion that might well be closer to reality than readers would imagine." —Booklist

"This is fun, propulsive reading for anyone who likes historicals with a touch of mystery." —Library Journal