Inside MAD: The "Usual Gang of Idiots" Pick Their Favorite MAD Spoofs (Hardcover) 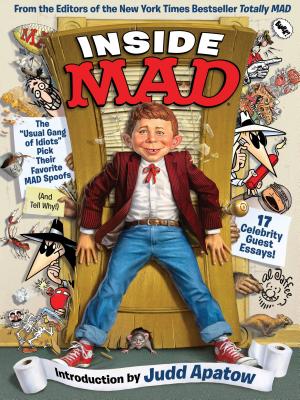 By The Editors Of Mad Magazine
$35.94
Backordered

It has long been assumed that anyone who wasted their formative years reading MAD must have wound up as a complete failure in life. But as it turns out, some readers actually went on to be...successful!

For the first time ever, MAD asked some of these successful readers to share what reading (and appearing in) MAD meant to them. What they have to say may surprise you!

Featuring essays with nouns, verbs, and punctuation by:
But wait-there's more! (Regrettably.)

MAD asked some of the aforementioned "complete failures in life" (MAD's editors, writers and artists to share their all-time favorite MAD articles. What they have to say will definitely disappoint you!

Featuring the moronic mumblings of:
Plus, inside: a never-before-reprinted Alfred E. Neuman pop art poster! And, an all new fold-out poster: a specially commissioned look at the legendary MAD offices by Sergio Aragones!

Now celebrating it's 61st anniversary, MAD Magazine is America's longest-running humor publication with that title. MAD has entertained, inspired and occasionally revolted generations of readers by satirizing politicians, celebrities, sports and pop culture. Whether in print, on television, the web or the iPad, MAD remains a cultural touchstone. MAD Magazine is part of DC Entertainment, a Warner Bros. Entertainment Company, though they frequently deny it.