All Woman and Springtime (Paperback) 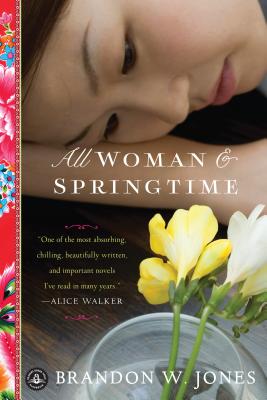 Before she met Il-sun in an orphanage, Gi was a hollow husk of a girl, broken from growing up in one of North Korea’s forced-labor camps. A mathematical genius, she learned to cope with pain by retreating into a realm of numbers and calculations, an escape from both the past and the present. Gi becomes enamored of the brash and radiant Il-sun, a friend she describes as “all woman and springtime.” But Il-sun’s pursuit of a better life imperils both girls when her suitor spirits them across the Demilitarized Zone and sells them as sex workers, first in South Korea and then in the United States.
All Woman and Springtime takes us behind the iron curtain of the most mysterious country on earth as it weaves a heartbreaking, breath-taking story.

Brandon Jones lives in Hawaii. His website is www.brandonjonesauthor.com.

“A gripping novel.”—O, The Oprah Magazine

“The North Korean government exploits its citizens completely and absolutely, and Brandon W. Jones has taken this as a starting point for a first novel that seems more like the polished work of an experienced novelist . . . Jones' writing provides a sense of urgency -- we want these women to leave, to risk everything in trying to escape their country and find a new life . . . His effort proves up to the challenge of vividly depicting the harsh, terrible circumstances and also believably gives hope that the individualist spark can sometimes carry us through to better things.”—Minneapolis Star Tribune

“An eye-opening journey to the dark side of desire.”—Vogue.com

“[A] moving, heartbreaking, yet hopeful novel . . . This important story exposes startling acts of human cruelty and uncovers the amazing resiliency of the human being, mind and body.”—Salt Lake City Weekly

“A compelling psychological tour of life inside the socially and politically restrictive borders of North Korea via the poignant stories of two young girls on the cusp of womanhood . . . This tale of female friendship is distinguished by its illuminating glimpse into the arcane intricacies of both an ancient and a modern culture. Guaranteed to appeal to fans of Memoirs of a Geisha (1997) and the novels of Lisa See.”—Booklist

“[A] terrifying and masterfully realized debut . . . One of its most impressive achievements is the rendering of main character Gi, who is brought powerfully and beautifully to life . . . Jones depicts both the innocence of his protagonist and the pathologies and violence of the South Korean underworld with great skill and emotional power. VERDICT Impossible to put down, this work is important reading for anyone who cares about the power of literature to engage the world and speak its often frightening truths.”—Library Journal