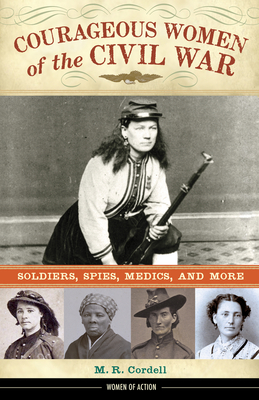 
Available to order! Usually Ships to Store in 3-5 Days.
At the outbreak of the Civil War, nearly everybody was caught up in patriotic fervor—men and women, Union and Confederate. Many women supported soldiers through knitting and sewing needed items, growing food, making bandages, gathering medical supplies, and more. But others wished they could be closer to the fight. These women defied society’s expectations and bravely chose to take on more dangerous, unconventional roles. Courageous Women of the Civil War reveals the exploits of 16 of these remarkable women who served as medics, spies, battlefield helpers, and even soldiers on the front lines.

Meet fascinating figures such as Maria Lewis, a former slave who fought with the Union cavalry as it swept through Virginia. Disguised as a white male soldier, she “put the fear of Hell” into Confederate enemies. Kady Brownell supported her husband’s Rhode Island regiment as a vivandière, training with the soldiers, fighting in battle, and helping the injured. Mary Carroll, a Missouri rebel, forged a copy of a jail cell key to break her brother out before his scheduled execution.

These and other little-known stories are told through gripping narrative, primary source documents, and contextualizing sidebars. Civil War history is woven throughout, offering readers a clear overview of the era and the war. Also including numerous historic photos, source notes, and a bibliography, Courageous Women of the Civil War is an invaluable resource for any student’s or history buff’s bookshelf.
M. R. Cordell earned a master’s in writing for children from Hamline University. She has contributed to Cicada, Cricket, Highlights, Read, The Horn Book, and more.

“Much of what Melinda Cordell presents here is new, often persuasive, always interesting, and testifies to the desire of women of the war era to play their part in their nation’s greatest moment.” —William C. Davis, author of An Honorable Defeat, Breckinridge, and Battle at Bull Run


“These women faced down the guns of the enemy, or the disdain of the surgeons, at the same time they were facing down the racial and gender prejudices of their society. The research in this book is very good, and the selection of biographies is excellent—a nice mix of both well-known and obscure heroines.” —DeAnne Blanton, coauthor of They Fought Like Demons: Women Soldiers in the Civil War

"The impressive research and impeccable storytelling brings these amazing women to life on every page. I loved so many things about this new volume in the Women of Action series, the sidebars, the thorough background information, and most especially the riveting stories of the female soldiers, spies, and nurses so rarely written about in Civil War history accounts. What a contribution to women’s history and an inspiration to young and older women today." —Claire Rudolf Murphy, author of My Country Tis of Thee: How One Song Reveals the History of Civil Rights

“Cordell gives a rousing account of 16 women who defied traditional roles to serve as soldiers, spies, medics, and vivandières during the American Civil War.” —Booklist

"The biographies include photos of some of the women and provide a fascinating and engaging look at their activities, motivations, trials, and later lives. Excellent, detailed backmatter adds to the volume's usefulness. A solid resource." —Kirkus Reviews

“[A] book which is sure to be popular among young history students, but is also satisfying for those older readers who want an easy-to-read, general overview of the subjects covered in Cordell’s fine work.” —Cannonball