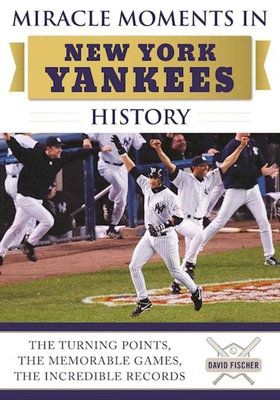 
This book may be unavailable. Please call us for price & availability: (316) 682-1181.
Throughout its illustrious history, the New York Yankees have produced some of the most memorable highlights in baseball annals. Babe Ruth’s “called shot” home run, Joe DiMaggio’s 56-game hitting streak, Derek Jeter’s amazing “Flip Play.” Most Yankees fans have seen newsreel footage of Lou Gehrig’s farewell speech, watched highlights of a young Mickey Mantle, and have heard the story of Billy Martin’s five managerial hirings and firings. But what makes the Yankees the world’s most celebrated sports franchise goes beyond sheer headlines? it is the stories of the men behind the headlines who have thrilled and enchanted New York fans since 1903.

Miracle Moments in New York Yankees History is the ultimate tribute book for die-hard fans of the Bronx Bombers. Whether you’re a passionate booster from the days of Yogi Berra or a newly minted supporter of Alex Rodriguez, author David Fischer has compiled a supreme collection of 50 of the most prominent and relevant team successes, player feats, and award-winning accomplishments from the Yankees’ incredible past and present. And, much like the team itself, Miracle Moments in Yankees History is about far more than just miracle moments; in-depth player profiles, exciting game details, and the perspective of time bring the greatest achievements of history’s greatest Yankees to life.

David Fischer has written for the New York Times and Sports Illustrated for Kids, and has worked at Sports Illustrated, National Sports Daily, and NBC Sports. He is the author of Yankee Stadium Scrapbook: A Lifetime of Memories and Derek Jeter #2: Thanks for the Memories; coauthor of Sports of the Times and Greatest Sports Rivalries; and editor of Facing Mariano Rivera. He lives in River Vale, New Jersey.