The Missing of Clairdelune: Book Two of the Mirror Visitor Quartet (Hardcover) 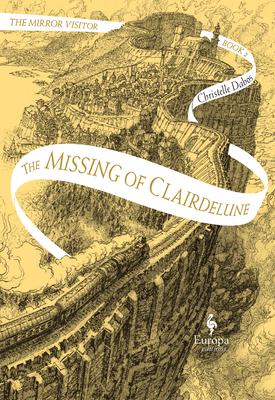 In the second installation of the Mirror Visitor Quartet, Christelle Dabos continues the tale of Ophelia, the animist, as she must find her way and her place on the Ark of Citaceleste. The Missing of Clairdelune opens with soft-spoken Ophelia still terribly frustrated with her betrothed, Thorn, and her protection from the Ark’s Family Spirit, Farouk, in limbo. Through her innate ability to read people and objects, Ophelia must insure her own safety, as well as the family members who will inevitably arrive for her wedding in just a few short months.

The cast of characters widens in Clairdelune, as does the web of secrets. Who can Ophelia trust? And how can Ophelia assert her own personhood on an Ark where she is forever cast as the foreigner betrothed to the unloved (and unlovable) Thorn? Ophelia’s mentor and protector Berenilde helps Ophelia as best as she can, but with Farouk’s ever-changing whims and Berenilde’s impending pregnancy, the task seems almost too difficult – even for the alluring favorite.

Despite Thorn having distanced himself from Ophelia, he still plans to go through with the marriage and the Exchange of Gifts that the wedding entails. However, it’s clear to see that he’s conflicted. Can Ophelia ever forgive him? Can he maintain a place in the Citaceleste despite the changing environment?

Beyond the conflicts that these characters face, the mystery of Farouk’s Book and the reason for the Rupture centuries ago looms large and threatens to destroy everything Ophelia has ever known and those she has learned to love. A fast-paced read with exceptional world building, The Missing of Clairdelune will leave you wondering, even as you turn the last page.

In book two of the bestselling Mirror Visitor Quartet, "the plots multiply, the world of the Arks gains depth, details abound, and the story envelops the reader as the pages fly by." (Le Monde des ados)

When Ophelia is promoted to Vice-storyteller by Farouk, the ancestral Spirit of Pole, she finds herself unexpectedly thrust into the public spotlight. her gift--the ability to read the secret history of objects--is now known by all, and there can be no greater threat to the nefarious denizens of her icy adopted home than this.

Beneath the golden rafters of Pole's capitol, she discovers that the only person she may be able to trust is Thorn, her enigmatic and emotionally distant fianc . As one influential courtier after another disappears, Ophelia again finds herself unintentionally implicated in an investigation that will lead her to see beyond Pole's many illusions to the heart of a formidable truth.