The Mystery of Rio (Paperback) 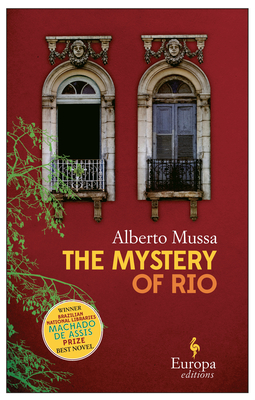 Reminiscent of the enigmatic fictions of Latin American greats Jorge Luis Borges and Julio Cortázar, The Mystery of Rio is a finely wrought work of fiction that will transport readers into a thrilling literary hall of mirrors where they might find themselves reflected at times, and pleasurably lost at others.

Rio de Janeiro, 1913. The Secretary of the Presidency of the Republic is found murdered at the former home of the Marquesa de Santos, known as the House of Swaps, a sophisticated brothel where secret liaisons are orchestrated and monitored. Under the guise of a medical clinic, the brothel is run by a scientist obsessed with the study of female sexual fantasies. During the criminal investigation, a forensic expert who frequents the House comes face-to-face with a rogue from Cais do Porto who is possibly involved in the murder. The two begin a competition to decide who is the greatest seducer.

Winner of the Brazilian National Libraries' Machado de Assis Prize for Best Novel, The Mystery of Rio is the latest of Alberto Mussa's unforgettable prize-winning novels.

Alberto Mussa was born in Rio de Janeiro, Brazil, in 1961. He translates poetry and short stories from Arabic, and has written several novels about the history of Rio de Janeiro. His rpize-winning nivels include Queen Jinga’s Throne (1999) and The Qaf’s Riddle (2004).


Alex Ladd is a native of Rio de Janeiro. His translations include Nelson Rodrigues' Life As It Is, Nestor Capoeira's The Little Capoiera Book, and the lyrics for Beleza Tropical II and Tom Zé's Fabrication Defect (compilations of Brazilian music released by David Byrne). He lives in New Jersey.

“One of the most original creations of Brazilian literature.”
—Folha de São Paulo

"[Mussa's] taste for fantasy, along with colorful cultural references, explains the... position he occupies on the domestic scene: the caretaker of a voluptuous narrative tradition, devoted to both history and myth."
—Veja