The Real Men In Black: Evidence, Famous Cases, and True Stories of These Mysterious Men and their Connection to UFO Phenomena (Paperback) 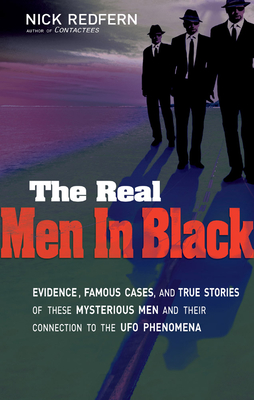 The Real Men In Black: Evidence, Famous Cases, and True Stories of These Mysterious Men and their Connection to UFO Phenomena (Paperback)


Available to order! Usually Ships to Store in 3-5 Days.
The Men in Black were elevated to superstar status in 1997 in the hit movie of the same name. Although the Hollywood blockbuster was fiction, the real Men in Black have consistently attempted to silence the witnesses of UFO and paranormal phenomena since the 1950s.

In The Real Men in Black, author Nick Redfern delves deep into the mysterious world of these mysterious operatives. He reveals their origins and discusses classic cases, previously unknown reports, secret government files, and the many theories that have been presented to explain the mystery.

Highlights of The Real Men in Black include:

Nick Redfern is the author of more than sixty books, including The NASA Conspiracies, Keep Out!, For Nobody’s Eyes Only, Immortality of the Gods, Top Secret Alien Abduction Files, The Real Men in Black, Bloodline of the Gods, Contactees, The Pyramids and the Pentagon, and Weapons of the Gods.  He has been on many television shows, including Travel Channel’s In Search of Monsters, History Channel’s UnXplained, Ancient Aliens,  and Monster Quest, SyFy Channel’s Proof Positive, and the National Geographic Channel’s Paranatural. Nick is a regular guest on Coast to Coast AM.  He lives in Arlington, Texas.
"Nick Redfern is the Brit with a knack for ferreting out all the dope on outrageous subjects."
— Jim Marrs, best-selling author of Alien Agenda