The Lion's Gate: On the Front Lines of the Six Day War (Hardcover) 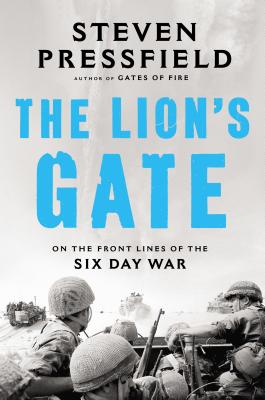 A brilliant look into the psyche of combat. Where he once took us into the Spartan line of battle at Thermopylae, Steven Pressfield now takes us into the sands of the Sinai, the alleys of Old Jerusalem, and into the hearts and souls of soldiers winning a spectacularly improbable victory against daunting odds.
General Stanley McChrystal, U.S. Army, ret.; author of "My Share of the Task"
June 5, 1967. The nineteen-year-old state of Israel issurrounded by enemies who want nothing less thanher utter extinction. The Soviet-equipped EgyptianArmy has massed a thousand tanks on the nation ssouthern border. Syrian heavy guns are shelling herfrom the north. To the east, Jordan and Iraq aremoving mechanized brigades and fighter squadronsinto position to attack. Egypt's President Nasser hasdeclared that the Arab force's objective is the destructionof Israel. The rest of the world turns a blind eyeto the new nation's desperate peril.
June 10, 1967. The Arab armies have been routed, ground divisions wiped out, air forces totally destroyed.Israel's citizen-soldiers have seized the Gaza Strip andthe Sinai Peninsula from Egypt, the Golan Heightsfrom Syria, East Jerusalem and the West Bank fromJordan. The land under Israeli control has tripled.Her charismatic defense minister, Moshe Dayan, hasentered the Lion's Gate of the Old City of Jerusalemto stand with the paratroopers who have liberatedJudaism's holiest site the Western Wall, part of theruins of Solomon's temple, which has not been in Jewishhands for nineteen hundred years.
It is one of the most unlikely and astonishing militaryvictories in history.
Drawing on hundreds of hours of interviews with veteransof the war fighter and helicopter pilots, tankcommanders and Recon soldiers, paratroopers, as wellas women soldiers, wives, and others bestsellingauthor Steven Pressfield tells the story of the Six DayWar as you ve never experienced it before: in the voicesof the young men and women who battled not onlyfor their lives but for the survival of a Jewish state, andfor the dreams of their ancestors.
By turns inspiring, thrilling, and heartbreaking, "TheLion's Gate" is both a true tale of military courage underfire and a journey into the heart of what it means tofight for one's people.

STEVEN PRESSFIELDis the author oftwelve previous books, including the bestselling novels"Gates of Fire" and "The Legend of Bagger Vance," as well asthe cult classic on creativity "The War of Art." He livesin Los Angeles."

“A brilliant look into the psyche of combat. Where he once took us into the Spartan line of battle at Thermopylae, Steven Pressfield now takes us into the sands of the Sinai, the alleys of Old Jerusalem, and into the hearts and souls of soldiers winning a spectacularly improbable victory against daunting odds.” —GENERAL STANLEY McCHRYSTAL, U.S. Army, ret.; author of My Share of the Task
“Pressfield is the king of military narrative, and with The Lion’s Gate he does not disappoint. It’s always amazing how hard people can fight when their backs are against the wall.” —ERIK PRINCE, author of Civilian Warriors
“Steven Pressfield is one of the most important writers of our day. Few others so adroitly weave together the stories of war in a way that captures the human side of a conflict. The Lion’s Gate gives us a rare glimpse into the different perspectives of a single historical event and proves to us there is always more than meets the eye.” —SIMON SINEK, author of Start with Why and Leaders Eat Last
“A very skillful and novel approach to one of the most significant and important conflicts in the Middle East. For those who like to have their history served with a generous dose of implied personal experience and just a dash of improvisation, I highly recommend The Lion’s Gate. Steven Pressfield commands the action effectively and from multiple perspectives. A valuable read.” —DICK COUCH, author of Always Faithful, Always Forward and Act of Revenge
“A sweeping, thrilling story of bravery, determination, and grit. I couldn’t put it down.” —BRIAN KILMEADE, author of George Washington’s Secret Six
“The finest military writer alive, bar none.”
—STEPHEN COONTS

“Rarely does an author manage to recreate a moment in history with such mastery, authority, and psychological insight.”
—NELSON DEMILLE

"Superbly researched and superbly written ... My tears flowed as the paratroopers made their way to and beyond the Western Wall, bringing that sacred spot back into the possession of the original owners ... "
—JOE GALLOWAY, co-author of We Were Soldiers Once ... And Young.