Forgotten Civilization: The Role of Solar Outbursts in Our Past and Future (Paperback) 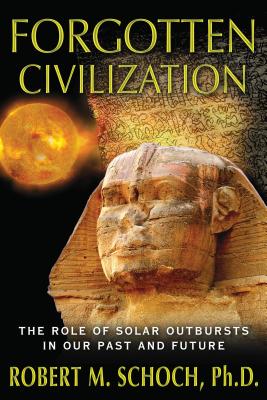 Forgotten Civilization: The Role of Solar Outbursts in Our Past and Future (Paperback)

Out of Print, and unable to order.
Scientific confirmation of advanced civilization at the end of the last ice age, the solar catastrophe that destroyed it, and what the evidence means for our future

• Demonstrates, based on the 12,000-year-old megalithic complex of Göbekli Tepe, that advanced civilization extends thousands of years further back than generally acknowledged

• Examines the catastrophic solar outbursts that ended the last ice age, wiping out antediluvian civilization and incinerating much of the evidence of that period

Building upon his revolutionary theory that the Sphinx dates back much further than 2500 BCE, geologist Robert Schoch reveals scientific evidence of advanced civilization predating ancient Egypt, Sumeria, and Greece, as well as the catastrophe that destroyed it nearly 12,000 years ago and what its legacy can teach us about our own future.

Combining evidence from multiple scientific disciplines, Schoch shows how the last ice age ended abruptly in 9700 BCE due to coronal mass ejections from the Sun. These solar outbursts unleashed electrical/plasma discharges upon Earth and triggered volcanic activity, earthquakes, fires, and massive floods as glaciers melted and lightning strikes released torrential rains from the oceans. He explains how these events eradicated the civilization of the time and set humanity back thousands of years, only to reemerge around 3500 BCE with scattered memories and nascent abilities. He explores within this framework, how many megalithic monuments, underground cities, and ancient legends fall logically into place, as well as the reinterpreted Easter Island rongorongo texts and the intentional burial, 10,000 years ago, of the Göbekli Tepe complex in Turkey. Schoch reveals scientific evidence that shows how history could repeat itself with a coronal mass ejection powerful enough to devastate modern society.

Weaving together a new view of the origins of civilization, the truths behind ancient wisdom, and the dynamics of the planet we live on, Schoch maintains we must heed the megalithic warning of the past and collectively prepare for future events.
Robert M. Schoch, Ph.D., a tenured faculty member at Boston University, earned his doctorate in geology and geophysics at Yale University in 1983. His books include Pyramid Quest, Voyages of the Pyramid Builders, Voices of the Rocks, Stratigraphy, Environmental Science, and The Parapsychology Revolution.
“Schoch is a true scientist, following the data wherever it leads, heedless of political pressures or worn-out paradigms. Twenty-two years ago, his redating of the Sphinx launched the New Archaeology. Forgotten Civilization distills all that has happened since into a simple conclusion: that solar activity ended the last cycle of high culture and may destroy ours in turn. Schoch is no scaremonger, no hawker of a pet theory. What we do with this knowledge is up to us, but once digested, it changes everything.”
— Joscelyn Godwin, author of Atlantis and the Cycles of Time

“Dr. Robert Schoch has produced an extremely well-studied thesis that is backed by his vast knowledge of geology and, more importantly, given the thesis impetus by his courage to go where many other academics fear to tread. Forgotten Civilization is a very well written book that not only reflects an excellent scientific research into the origins of civilization but also is highly entertaining and most enjoyable to read. Get this book and put it in a prominent place on your bookshelf. It deserves this honor.”
— Robert Bauval, author of The Orion Mystery

“Schoch’s well-founded conclusion is that mankind’s past on this planet is not only much older than what conventional historians have been teaching, but, as Paul LaViolette has demonstrated, we have gone through cycles of destruction and renewal corresponding to periods in and between coronal mass ejections (CME’s) and solar proton events (SPE’s) of our Sun.”
— Alan Glassman, New Dawn, January 2013

“...it is pleasing, and in some ways a relief, to read a book in this field that has been written by an author with the qualifications to back up his theories...”
— Trevor Pyne, Magonia, February 2013