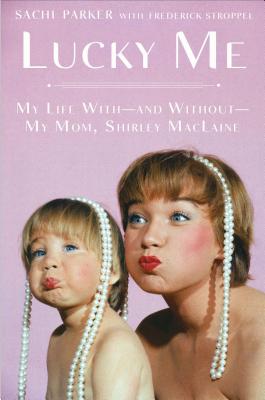 By Sachi Parker, Frederick Stroppel (With)
Email or call for price
Out of Print, and unable to order.

Shirley MacLaine is an Academy Award winning actress who has graced Hollywood with her talent for decades, known for her roles in "The Apartment," "Terms of Endearment," and recently the BBC/PBS smash "Downton Abbey." Yet as her daughter Sachi Parker can attest growing up with the movie star was far from picture perfect.

The only child of MacLaine and her husband ofthirty years, Steve Parker, Sachi's surreal childhood began when she was sent to Japan at the age of two though her mother would sometimes claim Sachi was six to live with her mercurial father and his mistress. She divides her time being raised by a Japanese governess and going back and forth to L.A. to be with her mother, hamming it up on movie sets, in photo shoots, and Hollywood parties, even winning and then abruptly losing the role of Scout in "To Kill a Mockingbird." As she gets older and attends boarding school in England and Switzerland, becomes a Qantas stewardess, andbecomes involved ina series of abusive relationships she tries to unravel the mysteries of her childhood and her parents unconventional marriage.

Including twenty never-before-seen personal photos, "Lucky Me"is a fascinating look at Hollywood and what it takes to succeed there, the incredible ambition of Shilrey MacLaine and the fallout it had on her only child, as well as a woman's attempt to understand and connect with her extremely complicated parents.

Sachi Parker is the only child of actress Shirley MacLaine and producer Steve Parker. An accomplished actress herself, Sachi has appeared in theater and films throughout the world. These appearances including "Stick," directed by Burt Reynolds, "Back to the Future, About Last Night, Peggy Sue Got Married, Riders to the Sea, "and "Scrooged," and TV shows such as "Star Trek: the Next Generation "and "Equal Justice." Her theater work includes "Ladies in Waiting, Pastorale, and The Lulu Plays," which she won a Daramalogue Best Actress award. Parker recently collaborated with co-author Frederick Stroppel ("A Brooklyn State of Mind") on a one-woman show about her life, also titled "Lucky Me."