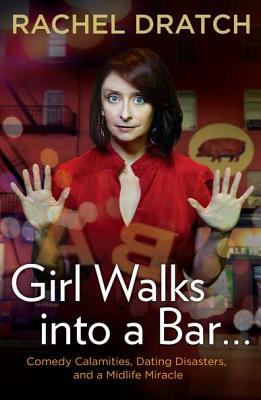 In this side-splitting memoir, the former "Saturday Night Live" star recounts the hilarious adventures and unexpected joy of dating and becoming a mother when she least expected it-at the age of forty-four.

Anyone who saw an episode of "Saturday Night Live" between 1999 and 2006 knows Rachel Dratch. She was hilarious So what happened to her? After a misbegotten part as Jenna on the pilot of "30 Rock," Dratch was only getting offered roles as "Lesbians. Secretaries. Sometimes secretaries who are lesbians."

Her career at a low point, Dratch suddenly had time for yoga, dog- sitting, learning Spanish-and dating. After all, what did a forty- something single woman living in New York have to lose? Resigned to childlessness but still hoping for romance, Dratch was out for drinks with a friend when she met John.

Handsome and funny, after only six months of dating long-distance, he became the inadvertent father of her wholly unplanned, undreamed-of child, and moved to New York to be a dad. With riotous humor, Dratch recounts breaking the news to her bewildered parents, the awe of her single friends, and the awkwardness of a baby-care class where the instructor kept tossing out the f-word.

Filled with great behind-the-scenes anecdotes from Dratch's time on "SNL, Girl Walks into a Bar..." is a refreshing version of the "happily ever after" story that proves female comics-like bestsellers Tina Fey and Chelsea Handler-are truly having their moment.

Rachel Dratch was a cast member on Saturday Night Live for seven seasons, where she was known for her characters Boston teen Denise "Zazu" McDonough, the "Lovers" professors with Will Ferrell, and Debbie Downer. "Girl Walks into a Bar... "is her first book. She plans on writing a 20-volume set about her life though, and selling it door-to-door like encyclopedias."

“Rachel Dratch has written a memoir that is funny, honest and optimistic.  It's like spending a delightful evening with Rachel, but in a format that allows you put her in your purse and enjoy her on the bus. (Rachel, I think Lynda Carter should play you in the movie and you should play your son.)”
-Tina Fey

"A hilarious look at how unpredictable and beautiful life can be. Like Dratch, Girl Walks into a Bar... is honest, surprising and always funny."
-Amy Poehler

"This is one of those books where a woman tells of her struggles with life and love. But here's the caveat: the struggles are hilarious and the woman is Rachel Dratch."
-Sarah Silverman