Tapped Out: Rear Naked Chokes, the Octagon, and the Last Emperor: An Odyssey in Mixed Martia l Arts (Paperback) 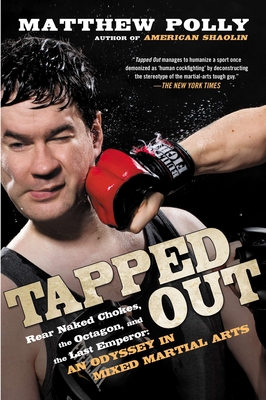 An aging amateur takes his shot at glory in the world of mixed martial arts.

As a younger man, Matthew Polly traveled to the Shaolin Temple in China and spent two years training with the monks who had invented the ancient art of kung fu. Fifteen years later, his weakness for Chinese takeout and Jack Daniel’s had taken its toll. Firmly into middle age and far removed from his past athletic triumphs, Polly decided to risk it all one last time. Out of shape and over the hill, he jumped headlong into the world of MMA.

In Tapped Out, Polly chronicles his grueling yet redeeming two-year journey through an often misunderstood sport. From Thailand to Russia, Manhattan to Las Vegas, Polly studied with the best trainers, concluding with a six-month fight camp at Randy Couture’s legendary gym. He explores the history of fighting sports and joins a fascinating subculture of men who roll around on sweaty mats with one another in appreciation of the purity of contained combat. And in the end, Polly straps on the gloves, gets into the cage, and squares off with a fighter fifteen years younger.

An honest and humorous look at a hard-core sport, Tapped Out is a fascinating look into the fastest growing sport in America and what it takes to be an MMA fighter.

Matthew Polly is an award-winning travel writer for Slate. A Princeton University graduate and Rhodes Scholar, Polly has also written for Esquire, Playboy, and The Nation. He lives in New York.

“Polly earned my respect. He's got a ton of heart. He did the work and played the part.” — Randy Couture, former UFC heavyweight champion

“Matt Polly's Tapped Out succeeds where all other MMA-related books fail: it tells a fight story for both the male and female reader.” — MMAConvert.com

“You have to give credit to the author for making a huge investment in proper training, the opportunity cost that he could have spent on more lucrative gigs, as well as the emotional pain Polly endured on the road to glory.” — TheSweetScience.com

“He’s a fighter. Not just a writer.” — New Hampshire NPR

“Hypnotic…Tapped Out manages to humanize a sport once demonized as “human cockfighting” by deconstructing the stereotype of the martial-arts tough guy.”

“You have to give credit to the author for making a huge investment in proper training, the opportunity cost that he could have spent on more lucrative gigs, as well as the emotional pain Polly endured on the road to glory.”

“Polly’s self-deprecation in the painful learning process stands out as much as the witty prose. His delivery is Plimpton-esque.”
—ESPN.com

“It is safe to say that if George Plimpton, the fellow who embodied participatory sports writing by pitching to Major League Baseball all-stars, playing quarterback for the Detroit Lions, and otherwise humiliating himself, were still alive, he’d cringe at Polly’s endeavor.”
—The Boston Globe

“Polly takes his training seriously, but as a writer, he never takes himself too seriously, which is one reason why his book works as well as it does.”
—Bill Littlefield, NPR’s "It’s Only a Game"

“A gregarious and charming protagonist, Polly comes across as self-deprecating, yet his enthusiasm and passion for martial arts are unmistakable. Readers familiar with MMA will be gratified to hear how affable their heroes are and will recognize themselves in the author’s shoes. Those who previously lacked knowledge of this modern craze will respect both Polly, for undertaking this odyssey, and the fighters whose grueling training regimens he followed.”
—Publishers Weekly

“Polly is hilarious as a narrator. He gets beaten, tossed, choked, and twisted like a dishrag on every page, yet maintains a humble sense of humor that is both charming and unique. Tapped Out is so in-your-face good you’ll check your jaw for bruises.”
—CultureMob.com

“Polly’s memoir of a middle-aged, thoroughly out-of-shape couch potato’s quest to become a UFC-style cage warrior is one of the funniest yet most insightful books that I’ve come across in quite a while.”
—SecondAct.com

“Tapped Out is a knockout for MMA fans, who will laugh at the intimate portraits Polly sketches of some of the sport’s most famous personalities. But it also works for those not familiar with the sport. It may even inspire you to start training. I say buy it and read it. You won’t be disappointed.”
—OpposingViews.com

“In between throwing up on the subway following training sessions and getting yelled at by Xtreme Couture coaches for his terrible diet, Polly actually learned a great deal about this sport and its denizens, and the book is a must-read for any MMA fan.”
—Ben Fowlkes, MMAFighting.com

“Tapped Out has a big heart that will make you enjoy its quirks as much as its virtues. It’s a delight to read and has a much greater mass appeal than most of its contemporaries. This book is a must-read for the MMA fan and a probably-should-read for everyone else.”
—TheFightNerd.com

“Matt Polly’s Tapped Out succeeds where all other MMA-related books fail: it tells a fight story for both the male and female reader.”
—MMAConvert.com

“Polly earned my respect. He’s got a ton of heart. He did the work and played the part.”
—Randy Couture, former UFC heavyweight champion