The Secret History of Extraterrestrials: Advanced Technology and the Coming New Race (Paperback) 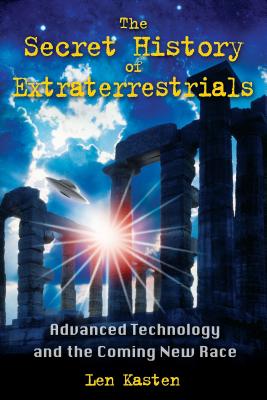 The Secret History of Extraterrestrials: Advanced Technology and the Coming New Race (Paperback)


Available to order! Usually Ships to Store in 3-5 Days.
Explores the role of ETs in the military, government, technology, history, and the coming new age

• Surveys contact with ETs, abductions, alien technology and exopolitics, genetic tampering by ETs, and the history behind the Nazis and UFOs

The extraterrestrial presence on Earth is widening and, as we enter the Aquarian Age, will be admitted officially, causing shock and an urgent universal need to understand the social and technological changes derived from our space brothers. A primer for the explosive advances humanity will experience scientifically and spiritually in the coming years, this compendium explores the ET phenomenon and its influence on humanity past and present.

The book surveys contact with ETs and abduction accounts, unexplained public and undisclosed military technology from aliens including anti-gravity devices, exopolitics (the influence of ETs in human affairs), the Iraqi Stargate, the Hybrid Project of alien interbreeding by abduction, Nazi ties to UFOS and their secret underground base in Antarctica, government cover-ups of alien interactions including Roswell, and the transformation triggered by the Hale-Bopp comet. Based on interviews with people who are witnessing the coming changes as well as those visionaries who are actually bringing them about--including John Mack, Major Jesse Marcel, Paul LaViolette, Robert Bauval, Michael Salla, and Helen Wambach--this book sketches out a breathtaking vision of the planetary revolution just around the corner.
Len Kasten is a UFO researcher and freelance writer. He intensively studied the Edgar Cayce Readings at the A.R.E. in Virginia Beach and has been a lifelong devotee of astrology and theosophy. He is a former member of the National Investigations Committee on Aerial Phenomena (NICAP) and the Mutual UFO Network (MUFON), and he is the president of the American Philosopher Society. He has been a feature writer, with more than 50 published articles, for Atlantis Rising magazine. He lives in Casa Grande, Arizona.
“Len Kasten’s The Secret History of Extraterrestrials provides an indispensable key to unlocking the hidden history of the extraterrestrial presence on our planet. The scope and implications of Kasten’s book are breathtaking, not because of some sleight of hand by an ambitious author, but because of the greater reality he unveils of extraterrestrials historically interacting with humanity.”
— Michael E. Salla, M.A., Ph.D., founder and president of Exopolitics Institute

“With our present knowledge of the cosmos, there is now a real possibility of evolved and intelligent civilizations elsewhere in the vast cosmological space. And possible visitations and even encounters can no longer be ignored. Naturally we must tread with caution and not jump to conclusions too easily and too readily; but we must also keep an open mind and respect those bold investigators who apply rigorous research and common sense to this fascinating although very debated hypothesis. Len Kasten is such an investigator, and his book The Secret History of Extraterrestrials is a must for the libraries of all seekers of truth with unbiased minds.”
— Robert Bauval, author of The Orion Mystery, Message of the Sphinx, and Black Genesis

“Len Kasten has provided an up-to-date survey of the vast array of issues that are now emerging into the public consciousness regarding an extraterrestrial presence engaging the human race. For those who want to jump right into the pool and not just sit on the side and dangle their feet, take the plunge with The Secret History of Extraterrestrials.”
— Stephen Bassett, executive director of Paradigm Research Group

“You can always count on Len Kasten to take you on a spellbinding galactic adventure, for he never fails to seek out ideas and theories that challenge your assumptions of what is true while firing your imagination. Whether in this dimension or another, be it past or future, your travels with Len Kasten will open your mind and introduce you to realities and experiences, you may have mistakenly assumed can exist only as fiction.”
— Paul Davids, director/producer of Jesus in India and executive producer/cowriter of Roswell: The UFO

“This comprehensive book covers some of the most intriguing UFO and alien-contact cases ever reported. Len Kasten has done a fine job of drawing together some fascinating material and asks some profound questions about what this means for the human race.”
— Nick Pope, UK Ministry of Defense, 1985-2006

“. . . Kasten was able to pull together information and compile it in a concise, reader-friendly manner.”
— Irene Watson, Reader Views Reviews, January 2011

“Even Hollywood would have a hard time screwing up such excitement. As mentioned before, you can approach this book from the “believer” or “non-believer” mindset, and still have a rollicking good time. Len Kasten’s The Secret History of Extraterrestrials is like holding a rabbit hole right in your hands. Go on, dive in!”
— New Dawn Magazine, August 2011