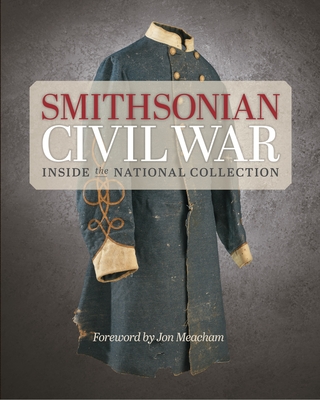 Smithsonian Civil War is a lavishly illustrated coffee-table book featuring 150 entries in honor of the 150th anniversary of the Civil War.  From among tens of thousands of Civil War objects in the Smithsonian's collections, curators handpicked 550 items and wrote a unique narrative that begins before the war through the Reconstruction period. The perfect gift book for fathers and history lovers, Smithsonian Civil War combines one-of-a-kind, famous, and previously unseen relics from the war in a truly unique narrative.

Smithsonian Civil War takes the reader inside the great collection of Americana housed at twelve national museums and archives and brings historical gems to light. From the National Portrait Gallery come rare early photographs of Stonewall Jackson and Ulysses S. Grant; from the National Museum of American History, secret messages that remained hidden inside Lincoln's gold watch for nearly 150 years; from the National Air and Space Museum, futuristic Civil War-era aircraft designs. Thousands of items were evaluated before those of greatest value and significance were selected for inclusion here. Artfully arranged in 150 entries, they offer a unique, panoramic view of the Civil War.

For the 150th anniversary of the war, 150 lushly illustrated thematic essays about both the objects the various Smithsonian sites hold and the people associated with them.

With the help of a cast of thousands, including Hyslop (Contest for California: From Spanish Colonization to the American Conquest, 2012, etc.), Kagan—former publisher of Time-Life Books and editor of other Civil War titles (Great Battles of the Civil War, 2002, etc.)—has assembled a striking collection of images with some equally clear words to accompany them. The selections range from the expected to the surprising. Among the former are entries on Ulysses S. Grant, Robert E. Lee, John Brown, Frederick Douglass, Clara Barton, George B. McClellan, J.E.B. Stuart and William T. Sherman—and, of course, Abraham and Mary Lincoln. But surprises appear almost everywhere. The pottery of slave David Drake, plaster casts of Lincoln’s hands and face (from 1860), messages scratched inside Lincoln’s watch, the various uniforms worn throughout the conflict, various surgical devices, a recipe (sort of) for hardtack, musical instruments, a lithograph of prisoners playing baseball, a violin carried by a soldier, images of early plans for winged aircraft, the chairs and tables used at Appomattox, the coffee cup Lincoln drank from the night of his assassination, the hoods worn by those convicted of and hanged for Lincoln’s murder, stunning photos of Sojourner Truth and Harriet Tubman—these are among the many delights that await readers. Most grim are the devices and inventions whose functions were to maim and kill: firearms, mortars, the Bowie knife, the accouterments of slavery. There are also plenty of images of the wounded, the dying and the dead. With each turn of the page, there are countless grisly reminders of the things human beings are capable of doing to one another: enslavement, murder, riot, combat, bombing, and on and on.

Beauty dances with horror on virtually every page.

This large-format book commemorates the 150th anniversary of the Civil War; the premise behind its publication is that “never before have Civil War treasures from throughout the Smithsonian been assembled and interpreted in one place as they are here.” The Smithsonian Institution, founded in 1846, currently comprises 19 museums and nine research centers, and from their vast collections have been photographed—in exquisite clarity—the “most valuable, significant, and interesting” Civil War–related items, ranging from valuable documents to battle flags, surgical instruments used in the field, uniforms and weapons, and an abundance of photographs, some iconic, others rarely seen. The items are arranged into groupings by specific topic, each of these groupings introduced by context-setting brief essays written by 49 contributing specialists. These chapter-topics include “Prewar Portraits” (of famous people before the war); “Sold Down the River” (internal slave trafficking); “Civil War Headgear”; “Letters Home”; “The Wartime Patent Office” (the building housing it served as a barracks and, later, as a hospital during the war); and “The Fate of Mary Lincoln.” The very reasonable price for this gorgeous storehouse of information allows its purchase for all active American history collections. — Brad Hooper

History is sometimes best told through the artifacts it leaves behind. As for the Civil War, the Smithsonian Institution’s artifacts can communicate more than any textbook ever could, from a violin carried by a Union soldier to the canvas hoods forced on Lincoln’s assassination conspirators. These and other haunted relics from the antebellum period through Reconstruction are found in Smithsonian Civil War: Inside the National Collection (Smithsonian, $40). Museum curators each selected and wrote about a specific object from the collections, generating a total of 150 entries. You might call a number of these objects works of art, particularly the pottery of David Drake, the Edgefield, S.C., slave who inscribed witty couplets and short poems onto his vessels, such as “Another trick is worst than this/Dearest Miss, spare me a kiss.”

This outstanding hardback pictorial history opens the Civil War collections of the Smithsonian and presents them in a remarkably accessible, artistic, and informative fashion.  The exceptional strength of this work is anchored on the astonishing Civil War collection of artifacts that the Smithsonian has within its vaults and on display, and subsequently reproduced in this volume.  Though the emphasis is on the visual experience, the narrative overviews and item descriptions  provide exceptional background and historical context for each chapter and component on display.  While the book can be viewed as either a reference volume or a coffee-table pictorial history, anyone with an interest in the Civil War, from university professor to elementary school student, will be drawn in and able to utilize this unique masterpiece for projects ranging from a school report to assembling a manuscript for publication; all objects and images contain their respective Smithsonian catalog identification. Quite frankly, every home and every library in the US should own a copy of this timeless masterpiece.  Most highly recommended.  Summing Up: Essential.  All levels/libraries  of all types. -- T. Maxwell-Long,  California State University, San Bernardino