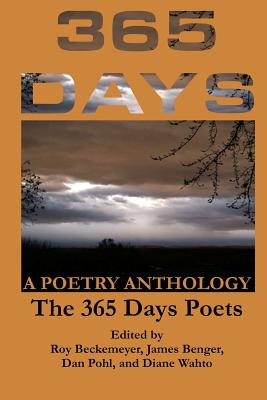 Kansas Poet Laureate (209-2013) emerita Caryn Mirriam-Goldberg says of 365 Days: A Poetry Anthology: "these poems invite us to glimpse the shifting, extraordinary world in the seemingly still moments of the ordinary." The closed Facebook group, 365 Poems in 365 Days, was formed in 2015. Members committed to writing a poem a day and sharing at least the title of the poem with the rest of the group. The effort was a resounding success; the supportive and collegial atmosphere engendered a flurry of poetry writing activity. At the year's end, members were invited to submit poems for consideration for publication. Twenty-one poets did so, and this resulting book contains 100 poems selected by editors Roy Beckemeyer, James Benger, Dan Pohl, and Diane Wahto. Denise Low, Kansas Poet Laureate (2007-2009) emerita, has called these "authentic, agile poems" written by "skilled, committed poets." John Dorsey, author of Appalachian Frankenstein, sees this book as "sharing its voice for all of the right reasons, offering humanity, letting people know that they're not alone, even on their darkest days." Poets included in this book: Barry "Washboard" Barnes, Roy Beckemeyer, James Benger, Carl Bettis, Matthew Bogart, Lindsey Martin-Bowen, Paul Goldman, Beth Gulley, GJ Gulley, Anne Haehl, Will Hagman, Sandy Hazlett, Melissa Fite Johnson, Alan S. Kleiman (aka Ace Mulvahil), Ronda Miller, Heather Mydosh, Eve Ott, Dan Pohl, Tyler Sheldon, Diane Wahto, and Sarah Worrel.

The Editors: Roy Beckemeyer, from Wichita, Kansas, has had poems in a variety of journals including Dappled Things, The Midwest Quarterly, Kansas City Voices, The North Dakota Review, and I-70 Review. His book, Music I Once Could Dance To, (Coal City Press, 2014), was selected for a 2015 Kansas Notable Book Award. He won the Beecher's Magazine Poetry contest in 2014 and the Kansas Voices Poetry Award in 2016. James Benger is a father, husband and writer. His stuff has been featured in several publications including Coal City Review, I-70 Review and Thorny Locust. He is the author of one chapbook of poetry, As I Watch You Fade (EMP, 2016). He lives in South Kansas City with his wife and son. Dan Pohl instructs English composition at Hutchinson Community College in Hutchinson, Kansas. Woodley Press published his first book of poetry; illustrated by his daughter Jessie Pohl, Autochthonous: Found in Place won The Kansas Author's Club Nelson Poetry Book Award for 2014. He lives in Moundridge, Kansas, and writes poems and prose poems. His work has been published in two 2013 anthologies: Begin Again: 150 Kansas Poems (Woodley Press) and To the Stars through Difficulties (Mammoth Publications), both edited by past Kansas Poet Laureate Caryn Mirriam-Goldberg. A sampling of his poems is found online at kansaspoets.com. Diane Wahto has been writing poetry since 1983. Her book, Leap of Faith, came out in Feb. 2015 when she participated in a reading with Wichita State University MFA alumnae Katy Kysar and Denise Lowe, and Prof. Jeanine Hathaway. She, her husband Patrick, and their two dogs live, laugh, and love in Wichita, Kansas.