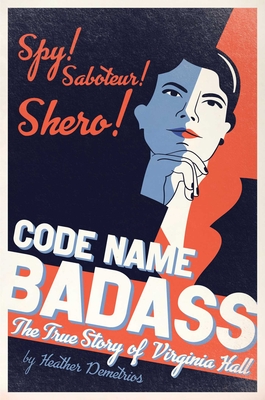 
Available to order! Usually Ships to Store in 3-5 Days.
“Bringing together rigorous research and a vibrant writing style” (School Library Journal), Code Name Verity meets Inglourious Basterds in this riotous, spirited biography of the most dangerous of all Allied spies, courageous and kickass Virginia Hall.

When James Bond was still in diapers, Virginia Hall was behind enemy lines, playing a dangerous game of cat and mouse with Hitler’s henchmen. Did she have second thoughts after a terrible accident left her needing a wooden leg? Please. Virginia Hall was the baddest broad in any room she walked into. When the State Department proved to be a sexist boys’ club that wouldn’t let her in, she gave the finger to society’s expectations of women and became a spy for the British. This boss lady helped arm and train the French Resistance and organized sabotage missions. There was just one problem: The Butcher of Lyon, a notorious Gestapo commander, was after her. But, hey—Virginia’s classmates didn’t call her the Fighting Blade for nothing.

So how does a girl who was a pirate in the school play, spent her childhood summers milking goats, and rocked it on the hockey field end up becoming the Gestapo’s most wanted spy? Audacious, irreverent, and fiercely feminist, Code Name Badass is for anyone who doesn’t take no for an answer.
Heather Demetrios is a critically acclaimed author, writing coach, and certified meditation teacher. She has an MFA in writing from Vermont College of Fine Arts and is a recipient of the PEN New England Susan P. Bloom Children’s Book Discovery Award for her debut novel, Something Real. Her novels include Little Universes, I’ll Meet You There, Bad Romance, as well as the Dark Caravan fantasy series. Her nonfiction includes the Virginia Hall biography Code Name Badass, and she is the editor of Dear Heartbreak: YA Authors and Teens on the Dark Side of Love. Her honors include books that have been named Bank Street Best Children’s Books, YALSA Best Fiction for Young Adults selections, a Goodreads Choice Nominee, a Kirkus Best Book, and more. Find out more about Heather and her books at HeatherDemetrios.com.
"Demetrios tells this fascinating story in an uber-modern narrative voice that is snarky AF, LOL, with plenty of hits to the patriarchy and a glorious sense of celebrating Dindy’s badassery. . . meticulously well-researched. . . A remarkable telling of an extraordinary woman."
— Kirkus Reviews

"Frequent first-person asides and ample pop culture references make even the more mundane details highly readable . . . Demetrios provides a thoroughly researched history of “La dame qui boite,” and those just discovering Dindy will be convinced that she was, in fact, a badass."
— BCCB

"Bringing together rigorous research and a vibrant writing style . . . [the author] ­creates a solidarity rooted in feminism and affectionately breaks the fourth wall to engage teens to keep reading. It’s a creative liberty, reminiscent of Jason Reynolds’s Stamped. . .This is a fun, illuminating read. . . A ­delightful account of an epic spy . . ."
— School Library Journal

"[The] true story of one of history’s greatest spies, documented in this well-researched biography. Using a conversational style replete with expletives, Demetrios blends necessary background information on WWII with detailed accounts of Hall’s espionage and reconnaissance missions in Vichy France. . . An enlightening account of a heroine worth knowing."
— Booklist