Boy Scouts of America - A Handbook of Woodcraft, Scouting, and Life-Craft - With Which is Incorporated by Arrangement General Sir Robert Baden-Powell' (Paperback) 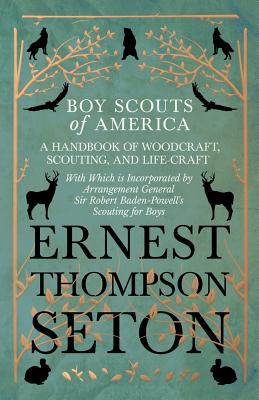 Boy Scouts of America - A Handbook of Woodcraft, Scouting, and Life-Craft - With Which is Incorporated by Arrangement General Sir Robert Baden-Powell' (Paperback)


Available to order! Usually Ships to Store in 3-5 Days.
(This book is not returnable.)
First published in 1911, this vintage book contains the official handbook of the Boy Scouts of America. It was produced as a means to instruct the boy scouts and provide advice in practical methods; and also includes inspiring and motivational information. Contents include: "Aim Of Scout Movement", "What Scouting Means", "Scout Virtues", "The Boy Scout Organization", "Scout Oath", "Scout Law", "Tenderfoot, Second Class And First Class Scout Requirements", "Badges, Awards And Equipment", "Knots Every Scout Should Know", etc. Ernest Thompson Seton (1860 - 1946) was an English author and wildlife artist who founded the Woodcraft Indians in 1902. He was also among the founding members of the Boy Scouts of America (BSA), established in 1910. He wrote profusely on this subject, the most notable of his scouting literature including "The Birch Bark Roll" and the "Boy Scout Handbook". Seton was also an early pioneer of animal fiction writing, and he is fondly remembered for his charming book "Wild Animals I Have Known" (1898). Many vintage books such as this are becoming increasingly scarce and expensive. We are republishing this book now in an affordable, modern, high-quality edition complete with a specially-commissioned new biography of the author.