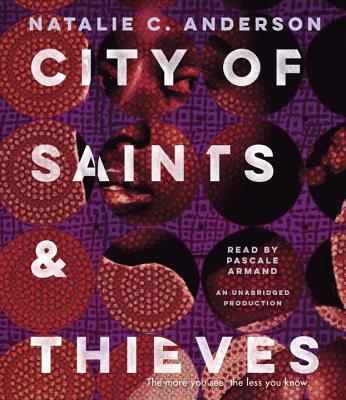 I'll admit something up front: like most Americans, I don't know a whole lot about the situation in the East African Countries. I know some -- that there's corruption, and there's violence, and that it's not exactly a safe place -- but I don't know the particulars of the situation.

In her debut young adult novel, City of Saints & Thieves, Natalie C. Anderson tackles East African issues -- from militia violence to the working conditions in the gold mines --  through the story of a 16-year-old Congolese refugee, Tina.

Ever since her mother's murder in the office of her employer, Tina has had one goal: to take down her mother's murderer. She thinks it's her mother's employer, the gold mining big wig Mr. Greyhill, whom had taken Tina and her mother in when they fled the Congo five years previously. However, in this intense young adult thriller, things  don't go according to plan: when she breaks into the Greyhill compound to put her plan into action, she's caught by Greyhill's son, Michael, who insists upon his father's innocence. Tina's capture and Michael's dogged insistence set events into motion that lead Tina to question everything she's believed in up to this point as she digs into her mother's past, looking for justice.

A former UN and NGO worker, Anderson has the experience needed to portray the complexity of the situation in East Africa. She handles the complex issues with grace, keeping it appropriate for her target audience (8th grade and up) but never shying away from the difficulty life in both Kenya and Congo presents. It helps, too, that she draws all of her characters -- from the sympathetic ones to the "bad guys" -- in varying shades of grey. It makes for a more interesting story.

There was a twist near the end, too, which I didn't quite see coming, but which raised the stakes and kept me plowing through until its resolution.

— Melissa Fox
The Girl with the Dragon Tattoo meets Gone Girl in this enthralling murder mystery set in Kenya.

In the shadows of Sangui City, there lives a girl who doesn't exist. After fleeing the Congo as refugees, Tina and her mother arrived in Kenya looking for the chance to build a new life and home. Her mother quickly found work as a maid for a prominent family, headed by Roland Greyhill, one of the city’s most respected business leaders. But Tina soon learns that the Greyhill fortune was made from a life of corruption and crime. So when her mother is found shot to death in Mr. Greyhill's personal study, she knows exactly who’s behind it.

With revenge always on her mind, Tina spends the next four years surviving on the streets alone, working as a master thief for the Goondas, Sangui City’s local gang. It’s a job for the Goondas that finally brings Tina back to the Greyhill estate, giving her the chance for vengeance she’s been waiting for. But as soon as she steps inside the lavish home, she’s overtaken by the pain of old wounds and the pull of past friendships, setting into motion a dangerous cascade of events that could, at any moment, cost Tina her life. But finally uncovering the incredible truth about who killed her mother—and why—keeps her holding on in this fast-paced nail-biting thriller.
Natalie C. Anderson is an American writer and international development professional living in Geneva, Switzerland. She has spent the last decade working with nongovernmental organizations (NGOs) and the United Nations on refugee relief and development, mainly in Africa. She was selected as the 2014–2015 Associates of the Boston Public Library Children’s Writer-in-Residence, where she wrote her debut novel, City of Saints & Thieves.
Praise for City of Saints & Thieves:

★ “[A] wonderfully twisted puzzle of a murder mystery.”—Booklist, starred review

★ “[B]y setting a fast-paced crime drama with compelling characters in this fraught region, Anderson does the good service of interesting young readers in this ongoing human conflict and the tragic toll it continues to take on the people of the region.”—BCCB, starred review

★ “Natalie C. Anderson's breathtaking debut is deep, dark and—remarkably for the subject—quite funny at times. . . . Pages will fly by as readers root for Tiny and her loved ones.”—Shelf Awareness, starred review

“Ocean’s Eleven meets Blood Diamond: Natalie C. Anderson’s City of Saints & Thieves, a gripping tale of revenge and redemption, tracks a murderer through the jungles of Congo and the far reaches of cyberspace, shining a light on the importance of family and friendship along the way—a perfect cocktail of suspense, action and heart.”—Tara Sullivan, critically acclaimed author of Golden Boy and The Bitter Side of Sweet

“City of Saints & Thieves will pull you from the very first page into a rarely seen world, violent and beautiful, where the only rule is survival and the only weapons are a young woman’s courage and love.”—Francisco X. Stork, award-winning author of Marcelo in the Real World and The Last Summer of the Death Warriors

“In prose as tenacious as her vendetta-driven and irresistible protagonist, Anderson interweaves personal and national tragedies, answering legacies of loss with the promise of family and friendship. City of Saints & Thieves is a world opener of a debut, one worth reading and remembering.”—Ashley Hope Pérez, Printz Honor–winning author of Out of Darkness

“A story full of twists and turns, proving nothing is ever as black and white as it may seem.”—Kirkus Reviews

“[A] linguistically beautiful murder mystery tale that will have you tearing through the pages, all along its twist and turns.”—Bustle

“A teenage Congolese refugee (a blend of The Girl with the Dragon Tattoo’s Lisbeth Salander and X-Men’s Storm) in Kenya seeks revenge for the killing of her mother.”—Hollywood Reporter

“A gripping journey of vengeance.”—US Weekly

“Anderson’s dark thriller will appeal to readers who prefer their mysteries political and their stakes high and who will feel rewarded by solutions in shades of gray rather than black-and-white.”—The Horn Book

“This nail-biting murder mystery set in Kenya follows Tina, a Congolese refugee, as she tracks down her mother's killer in the midst of corrupt businessmen, a master thief, and a street gang.”—Seventeen.com