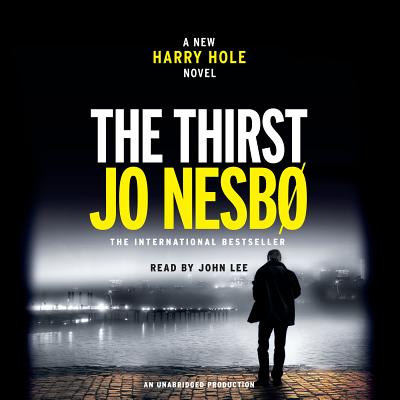 This is book number 11 in the Harry Hole Series series.

In this electrifying new thriller from the author of Police and The Snowman, Inspector Harry Hole hunts down a serial murderer who targets his victims . . . on Tinder.

The murder victim, a self-declared Tinder addict. The one solid clue—fragments of rust and paint in her wounds—leaves the investigating team baffled.
Two days later, there’s a second murder: a woman of the same age, a Tinder user, an eerily similar scene.
The chief of police knows there’s only one man for this case. But Harry Hole is no longer with the force. He promised the woman he loves, and he promised himself, that he’d never go back: not after his last case, which put the people closest to him in grave danger.
But there’s something about these murders that catches his attention, something in the details that the investigators have missed. For Harry, it’s like hearing “the voice of a man he was trying not to remember.” Now, despite his promises, despite everything he risks, Harry throws himself back into the hunt for a figure who haunts him, the monster who got away.

STARRED REVIEW
"Exceptional . . . Nesbo depicts a heartbreakingly conflicted Harry, who both wants to forget the horrors he’s trying to prevent and knows he has to remember them in all their grim detail."
--Publishers Weekly
JO NESBO played football for Norway’s premier league team Molde, but his dream of playing professionally was dashed when he tore crucial ligaments in his knee at eighteen. After three years’ military service he attended business school and formed the band Di derre (“Them There”). Their second album topped the charts in Norway, but he continued working as a financial analyst, crunching numbers during the day and gigging at night. When commissioned by a publisher to write a memoir about life on the road with his band, he instead came up with the plot for his first Harry Hole crime novel, The Bat. His books, translated into over 50 languages, have sold over 30 million copies worldwide, and he has received the Glass Key Award for best Nordic crime novel (previously awarded to Stieg Larsson and Henning Mankell). He lives in Oslo.
Praise for The Thirst:

“Jo Nesbø certainly has the magic touch when it comes to psycho serial killers. . . . Intricate plotting keeps the story shifting under our feet. Nesbø is a master at this narrative sleight of hand, and if you can stand the gory details and hang on during the switchback turns, the payoff is its own reward.”
—Marilyn Stasio, The New York Times Book Review

"[Nesbø is] the reigning king of Scandinavian crime fiction . . . [The Thirst is] a big-boned, Technicolor epic . . . starting adagio and ending accelerando, but with the kind of close psychological character readings that distinguished his early work."
—Barry Forshaw, The Guardian (London)

“It all starts with a Tinder date in a bar appropriately called Jealousy and ends with death on an ice-covered fjord. In between, The Thirst is filled with horrific murder scenes intensely detailed enough to chill the blood in your veins. . . .  You’ll want to sink your teeth into The Thirst and not let go.”
—Jonathan Elderfield, The Washington Post

“Wading into dark and deranged territory . . . an edgy and visceral read. [Nesbø] is a master of structure, style and no-pages wasted plotting. . . . In Nesbø’s consistently excellent Hole series, The Thirst may well be the pinnacle.”
—Eric Swedlund, Paste Quarterly

“Jo Nesbø has ripped the throat out of the serial-killer genre. He’s exsanguinated it, soaking up every dark pleasure and wringing them out onto the page. There’s no need to ever read another one, Nesbø has so completely deconstructed the trope with a multi-dimensional novel that blurs lines among crime, psychological procedural and, yes, horror thrillers. . . . [Hole] survives in a literary landscape dreamt up by Stephen King or Edgar Allen Poe. . . .  Brilliant . . . Nesbø shows his true mastery . . .  Nesbø’s plots are evocative of James Ellroy and Lee Child with crime layered upon crime.”
—Robert Anglen, Arizona Republic

“Exceptional . . . Nesbø depicts a heartbreakingly conflicted Harry, who both wants to forget the horrors he’s trying to prevent and knows he has to remember them in all their grim detail.”
—Publishers Weekly (starred review)

"A gripping, way-scary crime novel. . . . This one will keep readers awake deep into the night."
—Bill Ott, Booklist (starred review)

Praise for the work of Jo Nesbø:

“Nesbø writes like an angel. As in Lucifer.”
—The Philadelphia Inquirer

“Nesbø explores the darkest criminal minds with grim delight and puts his killers where you least expect to find them. . . . His novels are maddeningly addictive.”
—Vanity Fair

“Nesbø . . . is a giant of the Scandinavian mystery.”
—The Boston Globe

“Crime fiction’s most tortured and compelling hero. Alas, no armor exists strong enough to keep Harry from his demons, or the rest of us from Harry.”
—Booklist (starred review)

“Nesbø’s books have a serious, socially significant heft, as well as a confident (even cocky) narrative stride that is unmatched. These aren’t mere investigatory trifles to be enjoyed and forgotten; their unnerving horrors linger.”
—Richmond Times-Dispatch

“In the crowded field of Scandinavian crime fiction, Nesbø’s books stand out. . . . Nesbø likes to rip plots up . . . to play with the conventions of his genre.”
—The New Yorker

“Harry Hole is fast becoming one of the planet’s favorite detectives. And his demons are almost as legendary as his observational and analytical skills.”
—The Mirror (UK)

“[Nesbø is] the writer most likely to take the ice-cold crown in the critically acclaimed—and now bestselling—category of Nordic noir.”
—Los Angeles Times