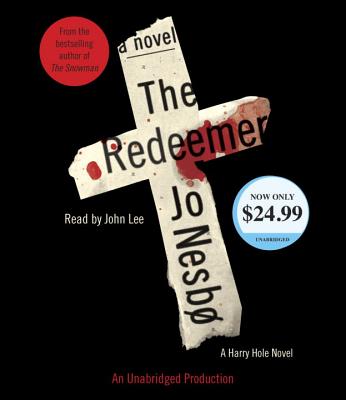 A fantastically gripping thriller from the best-selling author of The Snowman.

Christmas shoppers stop to hear a Salvation Army concert on a crowded Oslo street. A gunshot cuts through the music and the bitter cold: one of the singers falls dead, shot in the head at point-blank range. Harry Hole—the Oslo Police Department’s best investigator and worst civil servant—has little to work with: no suspect, no weapon, and no motive. But Harry’s troubles will multiply. As the search closes in, the killer becomes increasingly desperate, and Harry’s chase takes him to the most forbidden corners of the former Yugoslavia.

Yet it’s when he returns to Oslo that he encounters true darkness: among the homeless junkies and Salvationists, eagerly awaiting a savior to deliver them from misery—whether he brings new life or immediate death.

With its shrewdly vertiginous narrative, acid-etched characters, and white-hot pace, The Redeemer is resounding proof of Jo Nesbø’s standing as one of the best crime writers of our time.

Jo Nesbø’s books, translated into forty-seven languages, have sold more than seventeen million copies worldwide. His other Harry Hole novels include The Redbreast, Nemesis, The Devil’s Star, The Snowman (soon to be made into a major motion picture), The Leopard, and Phantom, and he is the author of Headhunters and several children’s books. Among the many international awards he has received is the Glass Key Award for best Nordic crime novel, and he has been recognized by the Norwegian Broadcasting Corporation and the Norwegian book clubs with an award for the best Norwegian crime novel of all time. In addition, Nesbø has been short-listed for an Edgar Award and three times for the CWA International Dagger. He is also a musician, songwriter, and economist and lives in Oslo.

“The pace is relentless. . . . The plot . . . [is] complex without becoming overheated.” —San Antonio Express-News

“The Redeemer rocks! Jo Nesbø is my new favorite thriller writer and Harry Hole my new hero. This book had my pulse in the red zone from start to finish.” —Michael Connelly

“Full of shocking chance and nuance, unforeseen twists and ice-crystal clear views of Oslo in winter.” —The Wall Street Journal

“A tour de force. . . . So tightly constructed and compelling that it’s impossible to put the book down.” —The Globe and Mail (Canada)

“A treat. . . .  Even when you’re positive that the mystery is entirely done and dusted, it invariably turns out that the pragmatic Detective Harry Hole has managed to stay three steps ahead, and there’s more to uncover.” —Time Out

“Nesbø is no ordinary writer. . . . A complex story, impossible to second-guess, which proves that greed, lust and a desire for revenge lurk within the saintliest of folk.” —The Sunday Telegraph

“Rarely does a mystery novel succeed on so many levels, as the intricate plotting explores psychological and theological dimensions that go deeper than standard notions of good and evil. . . . Those with an affinity for the darkest and most literary crime fiction will want to get here as soon as they can.” —Kirkus Reviews (starred review)

“The search for redemption is on—redemption through violence. The deeply flawed Hole is his familiar self: difficult and disrespectful, brilliant and intuitive. . . .  Told in powerful prose, [The Redeemer] never fails to grip.” —Publishers Weekly

“No doubt about it: Nesbø belongs on every crime-fiction fan’s A-list.” —Booklist