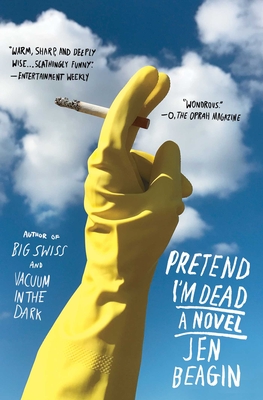 Whiting Award-winner Jen Beagin's first novel, Pretend I'm Dead, features the raunchy, antsy, droll and painstakingly proficient housekeeper Mona. After a blue-collar childhood in Torrance, Calif., with an alcoholic father and equally dysfunctional mother, she is placed with distant kin in Lowell ("Hole"), Mass., and pretty much left to fend for herself. By day she cleans the houses of her adopted hometown with "all this brick and repression... snow, wool, guilt." By night she works at a pop-up needle exchange where she meets a disabled addict wearing a tee with Jack Kerouac on the front. Two decades older and living in an SRO hotel, this man she calls "Mr. Disgusting" has a room with real paintings, Indian textiles and shelves of existential and Russian novels--unlike her last boyfriend: "some edgeless dude... whose heaviest cross to bear had been acne." Mona may not know where she's going, but she knows what she likes.

If Mona's uneasy relationship with Mr. Disgusting opens doors to possibility, her housecleaning work grounds her. She's got a vacuum jones ("on applications she listed it as one of her hobbies") to go with the practice of raiding her clients' medicine cabinets. When Mr. Disgusting disappears, he leaves her a letter urging her to escape to New Mexico to start a new life. Why not?

Packing her pickup with books and cleaning supplies, she takes off in "what the 12-steppers called a geographic," rents half an adobe casita duplex in Taos, and launches a housekeeping business. Sharing her casita, the ashram mystics Irishman Nigel and Japanese Shiori remind her of John and Yoko, "but the truth was, they were more like Yoko and Yoko." They take Mona under wing and introduce her to meditation, a healthy diet and marathon contemplation of New Mexico sunsets. Softening somewhat under their transcendental tutelage, Mona reaches out to reconnect with her father and even holds questioning discourse with the God she calls "Bob."

As Mona's business adds new referral clients, she finds herself scrubbing the floors and bathrooms of cancer victim Henry and spiffing the double-wide in the desert of red-haired psychic Betty. Beagin generously seasons her narrative with the nuts and bolts of housekeeping work, including Mona's reliable Hoover Aero-Dyne Model 51 vacuum and clever uses of Murphy Oil Soap on leather sofas and olive oil on stainless steel appliances. But Pretend I'm Dead is all Mona's story. The central characters of its four sections provide a different slant on her often painful path to maturity. She listens and she learns. Beagin's debut is grungy and ribald, melancholic and funny. Throw in a little wisdom, schmaltz and a few useful housekeeping tips, and Pretend I'm Dead delivers a real bang for the buck

When the book opens, 24-year-old Mona is a housekeeper in Boston. Having survived incompetent parents, Mona’s tough exterior and shrewd commentary on the world mask an empathic muscle that strengthens through the novel.

Aunt Sheila has been the ad hoc parent in Mona’s life and she owns the housekeeping service employing Mona. During the day, Aunt Sheila and Mona work together. While Sheila compartmentalizes the behind-the-scenes glimpses of her clients, Mona, with nothing to lose, chimes in with running psychoanalysis of each client—to great comedic effect.

When Sheila decides to sell the business and move to Florida, Mona is on her own. She is at the end of a heartbreaking relationship and finds herself making the first decisions that will determine her future. She moves to Taos, New Mexico; finds an apartment; and picks up housekeeping jobs to make ends meet. As Mona navigates being self-employed, she enters the murky waters of her own vulnerability.

With an acute sense of humor, Beagin ratchets up the tension as Mona investigates her clients’ lives. These intrusions provide Mona a mirror with which she can reflect on her own life and damaged childhood. Pretend I’m Dead elucidates sexual abuse, juxtaposing what we think we see and what we discover to be true. Beagin is insightful, funny, and generous to all her kind- and hard-hearted characters, and this promising debut novel assures us of the great healing power of art—even when we think we aren’t under the weather.

Sarah's review first appeared on 89.1 KMUW. You can listen to her review HERE.

— Sarah Bagby
NAMED A BEST BOOK of the YEAR by O, THE OPRAH MAGAZINE, REFINERY 29, and KIRKUS REVIEWS
SHORTLISTED FOR THE CENTER FOR FICTION FIRST NOVEL PRIZE

The “wondrous” (O, The Oprah Magazine), “scathingly funny” (Entertainment Weekly) debut from Whiting Award winner and author of Big Swiss Jen Beagin about a cleaning lady named Mona and her quest for self-acceptance.

Jen Beagin’s funny, moving, fearless debut novel introduces an unforgettable character, Mona—almost twenty-four, emotionally adrift, and cleaning houses to get by. She falls for a man she calls Mr. Disgusting, who proceeds to break her heart in unimaginable ways.

In search of healing, she decamps to Taos, New Mexico, for a fresh start, where she finds a community of cast-offs, all of whom have something to teach her—the pajama-wearing, blissed-out New Agers, the slightly creepy client with peculiar tastes in controlled substances, the psychic who might really be psychic. But always lurking just beneath the surface are her memories of growing up in a chaotic, destructive family from which she’s trying to disentangle herself, and the larger legacy of the past.

The story of Mona’s quest for belonging in this world is at once hilarious and wonderfully strange, true to life and boldly human, and introduces a stunning, one-of-a-kind new voice in American fiction.
Jen Beagin holds an MFA in creative writing from the University of California, Irvine, and is a recipient of a Whiting Award in fiction. Her first novel Pretend I’m Dead was shortlisted for the Center for Fiction’s First Novel Prize and Vacuum in the Dark was shortlisted for the Bollinger Everyman Wodehouse Prize for comic fiction. She is also the author of Big Swiss. She lives in Hudson, New York.
"Traces a cleaning woman’s journey to self-acceptance in alternately warm, sharp, and deeply wise fashion... Scathingly funny."  —Entertainment Weekly

“Like Denis Johnson, Jen Beagin is able to find humanity and wonder (and yes, love) in some of the most forlorn and hopeless corners of our world.” —Tom Perrotta, author of Mrs. Fletcher

"Rare is the encounter with such a frank and unflinching voice reporting from life on the edge, and rarer still the humor and compassion that Beagin manages to locate... This book invaded my dreams, took over my conversation, and otherwise seduced me totally." —Joshua Ferris, author of Then We Came to the End

"Jen Beagin has one of the freshest voices I've read in years—funny, wise, whip-smart and compassionate." —Jami Attenberg, author of The Middlesteins