Saving Manno: What a Baby Chimp Taught Me About Making the World a Better Place (Hardcover) 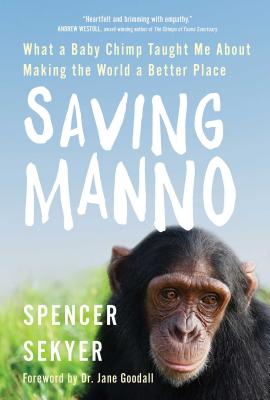 Saving Manno: What a Baby Chimp Taught Me About Making the World a Better Place (Hardcover)


Hard to Find. This book may be unable to order.
An inspiring and uplifting memoir about one small-town teacher’s eye-opening travels around the world and his relentless efforts to rescue a chimp in danger.

As a child, Spencer Sekyer’s world was a simple one. He grew up in a small town, where many of his days were spent hunting in the woods and pursuing his dream of becoming a professional athlete. But when his athletic career ended, he found himself seeking new goals.

Spencer returned to school and became a teacher. Realizing he still had much to learn about the world, Spencer set out to explore its most dangerous areas. He traveled to Sierra Leone to volunteer in a local school, followed by trips to the West Bank, Afghanistan, and Haiti. Each time, Spencer returned home a little wiser, a little more emotionally mature, and a little more ready to give back to a world that had given him so much.

In Duhok, Kurdistan, Spencer’s journey took a new turn. After stumbling into a local zoo, Spencer formed an unlikely bond with Manno, a young chimpanzee who had been kidnapped from his family in central Africa and sold into captivity. Determined to get Manno back to his home, Spencer began to investigate the shadowy, dangerous world of global animal trafficking. Facing resistance at every turn, and with ISIS closing in on Duhok, Spencer finally set in motion an international effort to get his friend to safety, before it was too late.

Bursting with compassion, inspiration, and courage, Saving Manno is a testament to the fact that every one of us has the power to change lives and make the world a better place.
Spencer Sekyer is an adventurer, philanthropist, and educator who has taught in Sierra Leone, the Dheisheh refugee camp in the West Bank, Afghanistan, Ethiopia, and Haiti. His passion is assisting children and animals in Canada and in distressed areas around the world, and his travel has taken him to Europe, the Middle East, Central and South America, Somalia, Tanzania, Rwanda, Democratic Republic of Congo, and Kenya. Spencer lives in Edmonton with his wife, Dr. Christie Macdonald Sekyer, their son, Anders, and their faithful Alaskan Malamute dog.
“Heartfelt and brimming with empathy. A compelling reminder that once we feel truly connected to an animal in need, we’ll stop at nothing to save them.”
— Andrew Westoll, award-winning author of The Chimps of Fauna Sanctuary