Lying in Wait: A Novel (Hardcover) 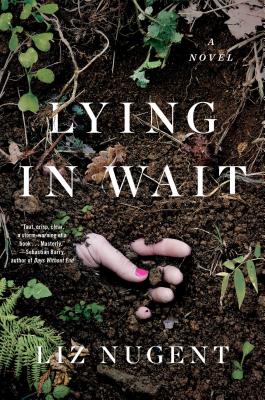 “An extraordinary novel. Lying in Wait crackles and snaps like a bonfire on a winter’s night; you shudder even as you draw closer to it. Spellbinding.” —A.J. Finn, #1 New York Times bestselling author of The Woman in the Window

From the international bestselling author of Unraveling Oliver, an “unputdownable psychological thriller with an ending that lingers long after turning the final page” (The Irish Times) about a Dublin family whose dark secrets and twisted relationships are suddenly revealed.

My husband did not mean to kill Annie Doyle, but the lying tramp deserved it.

On the surface, Lydia Fitzsimons has the perfect life—wife of a respected, successful judge, mother to a beloved son, mistress of a beautiful house in Dublin. That beautiful house, however, holds a secret. And when Lydia’s son, Laurence, discovers its secret, wheels are set in motion that lead to an increasingly claustrophobic and devastatingly dark climax.

For fans of Ruth Ware and Gillian Flynn, this novel is a “seductively sinister story. The twists come together in a superbly scary denouement, which delivers a final sting in the tail. Brilliantly macabre” (Sunday Mirror).

Liz Nugent has worked in Irish film, theater, and television for most of her adult life. She is an award-winning writer of radio and television drama and has written critically acclaimed short stories both for children and adults, as well as the bestselling novels Unraveling Oliver and Lying in Wait. She lives in Dublin. Visit her at LizNugent.ie or follow her on Twitter at @Lizzienugent.

“An extraordinary novel. Lying in Wait crackles and snaps like a bonfire on a winter’s night; you shudder even as you draw closer to it. Spellbinding.”
— A.J. Finn, #1 New York Times bestselling author of The Woman in the Window

“Taut, crisp, clear, a storm-warning of a book.  It has the eeriness of ‘The Turn of the Screw;’ but as these screws turn, a mighty tension takes hold. Masterly.”
— Sebastian Barry, author of Days Without End

"Like Unraveling Oliver (2017), this is a whydunit, not a whodunit, and the real meat lies in Nugent's exploration of motherhood, mental illness, and what could drive a person to murder...  A page-turner chock full of lies and betrayals and a very creepy mother-son relationship."
— Kirkus Reviews

"[A] chilling tale of the sociopathic mind… Readers who love sinister psychological thrillers will tear through these pages."
— Library Journal (starred review)

“Nugent introduces an unforgettable cast of characters in this tour de force…astonishing....everyone should grab it the second it appears."
— Booklist (starred review)

"Truly outstanding."
— Crime by the Book

"Just when you think you have things figured out, Nugent throws everything off-kilter again. All of the primary characters --- including the dead woman, Annie --- are complicated and well-rounded...and defy easy categorization as “villain” or “hero.” Readers who first encountered Nugent’s work only recently will be thrilled with this new-to-us thriller --- and will be thronging for even more of her excellent work to make its way across the pond."

"Though we know Lydia and Andrew Fitzsimmons’ big secret by the end of the first sentence of Nugent’s book, it’s why they did it that initially remains a mystery...The secret may be out, but the intrigue remains."
— Brit + Co

"Nugent tells a brilliant tale—taut, horrifying, chilling...the plot is impossible to resist and the tale is beautifully written...If you like psychological thrillers, “Lying in Wait” is perfect."
— Fredericksburg Freelance Star

"Perfect for those who have already read A Woman in the Window and are looking for a new gripping read."
— The Amazon Book Review

"Electrifying ... a chilling narrative with an unexpected ending that will take your breath away."
— Bustle

“Darkly funny, creepy, and has one of the most disturbing endings I’ve ever read!”
— Robyn Harding, international bestselling author of The Party

"This book is a brutal as it is beautiful, with the year's most haunting ending."
— CrimeReads