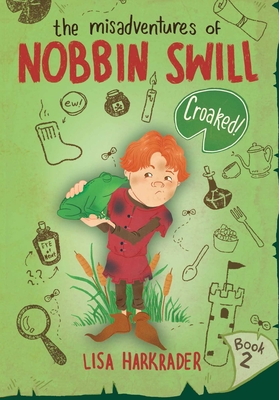 
On Our Shelves Now
Nobbin Swill returns to solve another mystery in the second book in this hilarious middle-grade series that has color illustrations throughout!

Nobbin is now Prince Charming's assistant, though he's not able to assist him in his prince training when things go awry saving Princess Angelica. After that mishap, Sir Roderick thinks the princess needs training too and advises the king to send her away to a queen who can properly educate her. The king has doubts, but the queen suddenly shows up with her son, Figbert.

They both torment and insult everyone at the castle and in the village until one day, Figbert disappears. The queen thinks it's the butler, but Nobbin suspects Sir Roderick. As they search for clues, they finally are able to find Figbert, but he's not quite like they remember. He's much smaller, rounder, and much, much greener. Will they be able find out who turned him into a frog and crack the case?
Lisa Harkrader grew up in a small town that, to her disappointment, was not magical, enchanted, or populated by trolls. Luckily, she found the town library and its magical books brimming with enchanted beings. Luckier still, she grew up to be a writer and is now creates enchanted worlds for other readers. Lisa Harkrader's first novel was Airball: My Life in Briefs. She wrote and illustrated her last two novels, The Adventures of Beanboy and Cool Beans: The Further Adventures of Beanboy. She lives with her family in Kansas.
A laugh-out-loud adventure filled with surprises, misdeeds, and dung farming!
— Dan Richards, author of Stu Truly and Stu Truly: First Kiss

Grown-ups will chuckle at the clever asides and youngsters will love the rollicking adventures.
— The Christian Science Monitor

Following Crumbled (2019), a second outing for fairy-tale mystery-solver Nobbin, Prince Charming's assistant.
Though Nobbin's entertained by Prince Charming's prince lessons, Charming's younger sister, Princess Angelica, bores quickly of being a damsel stand-in, asking hard-hitting questions like: If a prince climbs a damsel's hair to get up a tower, "how can he carry her and still use her hair to climb down?" In response to her tomboyish ways, the sinister adviser to the king (a guy so sketchy that the characters, when suspecting him of villainy, ask if he is "suspicious suspicious? Or just his everyday suspicious?") hatches a scheme to have her schooled in courtly manners by Queen Ermintrude, who promptly arrives with her son, Prince Figbert, to take her away. Nobbin and company try to help Angelica maintain her comportment while rotten Figbert baits her with aggressive rudeness. The arrangement falls apart when the contract's fine print calls for a royal betrothal, Angelica proclaiming she "would rather kiss a frog." When Figbert turns into a frog overnight, Nobbin leads the charge to find the culprit and a way to restore Figbert. There's a secondary mystery about the queen's motivations (and missing valuables). Both gently humorous gender and genre critiques and delightful language and wordplay elevate plotlines. Each chapter opens with a full-page illustration (in grayscale and, fittingly, green), and vignettes further decorate the pages. Characters default to White.
— Kirkus Reviews