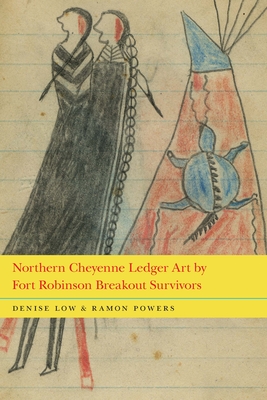 
On Our Shelves Now
A 2021 Kansas Notable Book

Northern Cheyenne Ledger Art by Fort Robinson Breakout Survivors presents the images of Native warriors—Wild Hog, Porcupine, and Left Hand, as well as possibly Noisy Walker (or Old Man), Old Crow, Blacksmith, and Tangled Hair—as they awaited probable execution in the Dodge City jail in 1879. When Sheriff Bat Masterson provided drawing materials, the men created war books that were coded to avoid confrontation with white authorities and to narrate survival from a Northern Cheyenne point of view. The prisoners used the ledger-art notebooks to maintain their cultural practices during incarceration and as gifts and for barter with whites in the prison where they struggled to survive.

The ledger-art notebooks present evidence of spiritual practice and include images of contemporaneous animals of the region, hunting, courtship, dance, social groupings, and a few war-related scenes. Denise Low and Ramon Powers include biographical materials from the imprisonment and subsequent release, which extend the historical arc of Northern Cheyenne heroes of the Plains Indian Wars into reservation times. Sources include selected ledger drawings, army reports, letters, newspapers, and interviews with some of the Northern Cheyenne men and their descendants. Accounts from a firsthand witness of the drawings and composition of the ledgers themselves give further information about Native perspectives on the conflicted history of the North American West in the nineteenth century and beyond.

This group of artists jailed after the tragedy of the Fort Robinson Breakout have left a legacy of courage and powerful art.
Denise Low teaches in the School of Graduate Studies at Baker University. She is a former Kansas poet laureate and former dean of humanities and arts at Haskell Indian Nations University. She is the author of creative works and the memoir The Turtle’s Beating Heart: One Family’s Story of Lenape Survival (Nebraska, 2017). Ramon Powers is the former executive director of the Kansas State Historical Society. He is the coauthor of The Northern Cheyenne Exodus in History and Memory.

"[Northern Cheyenne Ledger Art by Fort Robinson Breakout Survivors] is a great contribution that honors Cheyenne artists, past and present, as well as the Cheyenne culture."—Leo Killsback, Western Historical Quarterly

"Low and Powers and the ledger artists take readers on a journey of self-revelation because of the art and because of the narrative."—Richard Littlebear, Tribal College Journal

"This book is highly recommended for persons interested in Indian pictographs, as well as anyone interested in the final days of this era of the Cheyenne Nation."—Jeff Broome, Denver Posse of Westerners

"This is a fascinating glimpse of Northern Cheyenne culture researched and written by two well-qualified authors."—Elby Adamson, Clay Center Dispatcher

“This book resonates with Indigenous survivance and Northern Cheyenne nationhood, revealing a cultural vitality not erased by settler colonialism in the reservation era. It is an exciting contribution to the field of ledger-art studies. The unique content of the Dodge City drawings constitutes an unusual record of a transitional historical period.”—Brad D. Lookingbill, author of The American Military: A Narrative History

“This is an impeccably researched, beautifully written work, worthy of a prominent place in the literature relating to Northern Cheyenne history and art. This volume is a worthy tribute to Wild Hog, Porcupine, and the others with them who, in the misery of prison, created drawings portraying and reflecting the beauty and supernatural power of the life of the people, the Morning Star People.”—Father Peter J. Powell, editor of In Sun’s Likeness and Power: Cheyenne Accounts of Shield and Tipi Heraldry