It's a Question of Space: An Ordinary Astronaut's Answers to Sometimes Extraordinary Questions (Paperback) 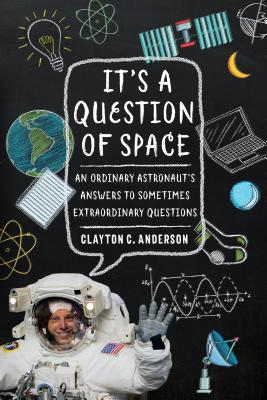 It's a Question of Space: An Ordinary Astronaut's Answers to Sometimes Extraordinary Questions (Paperback)


Available to order! Usually Ships to Store in 3-5 Days.
Having spent over 150 days on his first tour of the International Space Station, it’s safe to say that Clayton C. Anderson knows a thing or two about space travel. Now retired and affectionately known as “Astro Clay” by his many admirers on social media and the Internet, Anderson has fielded thousands of questions over the years about spaceflight, living in space, and what it’s like to be an astronaut. Written with honesty and razor-sharp wit, It’s a Question of Space gathers Anderson’s often humorous answers to these questions and more in a book that will beguile young adults and space buffs alike.

Covering topics as intriguing as walking in space, what astronauts are supposed to do when they see UFOs, and what role astronauts play in espionage, Anderson’s book is written in an accessible question-and-answer format that covers nearly all aspects of life in space imaginable. From living in zero gravity to going to the bathroom up there, It’s a Question of Space leaves no stone unturned in this witty firsthand account of life as an astronaut.

Clayton C. Anderson retired in 2013 after a thirty-year career with NASA and two missions to the International Space Station, during which he performed six spacewalks. He is the author of The Ordinary Spaceman: From Boyhood Dreams to Astronaut (Nebraska, 2015) and A is for Astronaut: Blasting through the Alphabet. He is also a motivational speaker and a senior faculty fellow and distinguished lecturer of aerospace engineering at Iowa State University. He lives in League City, Texas, with his wife and two children.

"Covering an impressive amount of material, A Question of Space is an engaging read for those fascinated by the history of the space program."—Jeff Fleischer, Foreword Reviews

“Let’s be honest: all you really must know about life in space is how astronauts go to the bathroom. The answer is flushed out here in candid, comedic detail. But wait, there’s so much more! Leave it to this self-proclaimed ‘Ordinary Spaceman’ to understand the banal is not boring. To the contrary, it’s what fascinates us most.”—Miles O’Brien, award-winning journalist in science, technology, aviation, and aerospace

“Clay Anderson dispels myths and simplifies complex subjects for the reader and with examples from his personal experiences provides insight into the daily life of an astronaut. As a teacher trying to fuel the curiosity of and relate relevant topics to students, I would keep a copy of this book on my desk.”—Dottie Metcalf-Lindenburger, earth scientist, educator, and retired astronaut


“Clayton Anderson is an American hero but he’s as down-to-earth as they come. From the simple to the sublime, It’s a Question of Space is a wonderful collection of stories and answers to questions we all have about traveling in space. Drawn into his easy-to-understand explanations and humorous anecdotes, I couldn’t put it down.”—Tom Abrahams, author of the Spaceman Chronicles series