Man of the Hour: James B. Conant, Warrior Scientist (Paperback) 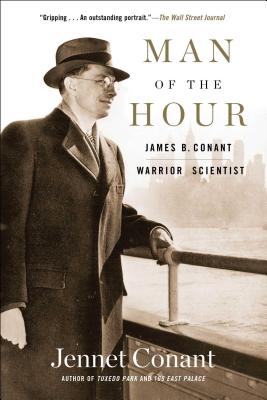 “Gripping…an outstanding portrait” (The Wall Street Journal) of one of the most influential men of the greatest generation, James B. Conant—a savvy architect of the nuclear age and the Cold War—told by his granddaughter, New York Times bestselling author Jennet Conant.

James Bryant Conant was a towering figure. He was at the center of the mammoth threats and challenges of the twentieth century. As a young eminent chemist, he supervised the production of poison gas in World War I. As a controversial president of Harvard University, he was a champion of meritocracy and open admissions. As an advisor to FDR, he led the interventionist cause for US entrance in World War II. During that war, Conant oversaw the development of the atomic bomb and argued that it be used against the industrial city of Hiroshima in Japan. Later, he urged the Atomic Energy Commission to reject the hydrogen bomb and devoted the rest of his life to campaigning for international control of atomic weapons. As Eisenhower’s high commissioner to Germany, he helped to plan German recovery and was an architect of the United States’ Cold War policy.

Now New York Times bestselling author Jennet Conant recreates the cataclysmic events of the twentieth century as her grandfather James experienced them. She describes the guilt, fears, and sometimes regret of those who invented and deployed the bombs and the personal toll it took. “A masterly account…a perceptive portrayal of a major player in world events throughout the mid-twentieth century” (Publishers Weekly), Man of the Hour is based on hundreds of documents and diaries, interviews with Manhattan Projects scientists, Harvard colleagues, and Conant’s friends and family, including her father, James B. Conant’s son. This is “a most serious work, well written and evocative of an era when the American foreign establishment exuded gravitas…[a] new, relentless, and personally invested account” (The New York Times Book Review).

Jennet Conant is the author of Man of the Hour: James B. Conant, Warrior Scientist and the New York Times bestsellers The Irregulars: Roald Dahl and the British Spy Ring in Wartime Washington and Tuxedo Park: A Wall Street Tycoon and the Secret Palace of Science That Changed the Course of World War II. She has written for Vanity Fair, Esquire, GQ, Newsweek, and The New York Times. She lives in New York City and Sag Harbor, New York.

“Gripping . . . an outstanding portrait of a technocrat, at work and at home.”
— Wall Street Journal

“A most serious work, well written and evocative of an era when the American foreign establishment exuded gravitas. . . . [a] new, relentless and personally invested account.”
— The New York Times Book Review

“This is biography and history at its best. The story of James Conant provides the perfect channel to engage our interest as we journey together through the major turning points of the 20th century. An intimate, sometimes heartbreaking portrait of Conant’s personal life is seamlessly linked to the great public achievements of his remarkable public career.”
— Doris Kearns Goodwin, Pulitzer Prize-winning author of Team of Rivals and The Bully Pulpit

“A masterly account . . . a perceptive portrayal of a major player in world events throughout the mid-20th century.”
— Publishers Weekly

“[James B. Conant] is well-served by the 500 pages of his granddaughter's intensely researched, insightful, and rarely dull biography. Conant deserves a place among the traditional "wise men" (Acheson, Harriman et al.), an elite group of white, male, East Coast advisers, all pragmatic, realistic, and nonideological, who guided presidential policy from World War II through the end of the Cold War. This book gives him that place.”
— Kirkus Reviews

“Conant has written a thoughtful, complete biography of her grandfather, the influential scientist James B. Conant. . . . This extensive portrait of a contemporary of Winston Churchill, Robert Oppenheimer, and other key figures will appeal to anyone interested in the interplay of 20th-century science, academia, politics, and international affairs.”
— Library Journal

“No one is better suited to write a biography of James Conant, one of America’s historically most important national science advisers, than his talented granddaughter Jennet Conant. She’s made an outstanding and definitive work of it, one that illuminates the whole World War II and postwar eras.”
— Richard Rhodes, Pulitzer Prize-winning author of The Making of the Atomic Bomb

“From transforming Harvard to overseeing the construction of the atom bomb, James Conant was one of the most influential Americans of his time. Jennet Conant reveals his wisdom and explores his moral ambiguities with the grace of a bestselling author and the insights of a granddaughter.”
— Walter Isaacson, author of Leonardo da Vinci and The Wise Men

“James Bryant Conant did more to shape the world than all but a few presidents—developing the first WMD as a young chemist, running the Manhattan Project, governing post-war Germany and inventing the American meritocracy. Now his granddaughter, Jennet Conant, an esteemed historian, has brought his story brilliantly alive. This book is destined to be a biographical classic.”
— Jonathan Alter, author of The Defining Moment: FDR's Hundred Days and the Triumph of Hope

“A fresh take on [James B. Conant’s] life . . . Jennet Conant is a fine writer, and her biography emerges at a salutary moment. The story of James Conant's attempts to create a re-intellectualized US government and a better-educated public, and his vision of a shaping role for the United States in an ever-changing world, are important reminders in an age of devalued expertise, educational crises and turbulent governance.”
— NATURE

"[A] magisterial biography of one of the 20th century’s most influential men...she brings to her task the same objectivity, thoroughness and interest that her grandfather brought to his. Insightful and rich in detail, this book is a fitting tribute to a remarkable man."
— Bookpage

"An engrossing, nuanced portrait of a complex and enormously influential man."
— NBC-2.com

"The point is that all these issues Conant and those of his time were grappling with — social mobility, college access, distorted facts, football, mental health, the atom bomb, Harvard alumni being worried about the state of the nation — are still with us, almost a century later."
— Newsmax

"Jennet Conant’s capable, informative portrait should be included in collections about the history of American science."
— Booklist

“Mr. Conant’s was a life of significant achievements. He brought a flinty New England competence to everything he tackled. His granddaughter, a New York Times best-selling author, brings comparable skill to the potentially tricky task of recounting that life. . . . an honest and balanced examination.”
— East Hampton Star