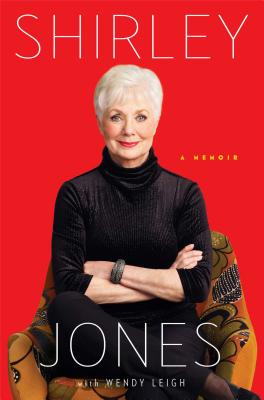 By Shirley Jones
$29.70
Out of Print - Contact us to order used copies.

“In this memoir you are going to meet the real flesh-and-blood Shirley Jones, not just the movie star or Mrs. Partridge.”

So begins Shirley Jones’s hilarious, heartwarming and wonderfully honest New York Times bestselling memoir, in which she gives all her fans another reason to “Come On, Get Happy.”

Shirley sang her way into America’s heart in classic films like Oklahoma!, Carousel, and The Music Man. She won the Academy Award for Best Supporting Actress in Elmer Gantry. And she played one of television’s most beloved moms in the iconic 1970s sitcom, The Partridge Family. From golden-voiced ingénue to bus-driving mother of a pop band, Shirley Jones has always seemed as pure and wholesome as her squeaky-clean image. But now she’s ready to set the record straight—in a memoir as shockingly candid, deliciously juicy, and delightfully frank as the star herself.

This is the real Shirley Jones: a small-town girl from Pennsylvania with a rebellious nature, radiant smile, and rare talent that grabbed the attention of Broadway legends Rodgers and Hammerstein—on her very first audition. Shirley’s meteoric rise put her in the company of major movie stars like Frank Sinatra, Marlon Brando, and Burt Lancaster. But it was the dashing, charismatic, and deeply troubled actor Jack Cassidy who stole Shirley’s heart—and unlocked her highly charged sexuality. For the first time, she reveals the stunning details of their rocky marriage and adventurous life: the infidelities, the costar crushes, the sexual experimentation. She talks openly about her relationship with stepson David Cassidy, her cult status with The Partridge Family, and her second marriage to wacky TV comedian and producer Marty Ingels. Most of all, she reveals a side of Shirley Jones we’ve never seen before...

Shirley Jones is an American singer and actress of stage, film, and television. In her six decades of show business, she has starred as wholesome characters in a number of well-known musical films, such as Oklahoma! (1955), Carousel (1956), and The Music Man (1962). She won the Academy Award for Best Supporting Actress for playing a vengeful prostitute in Elmer Gantry (1960). She played Shirley Partridge, the widowed mother of five children in the situation comedy television series The Partridge Family (1970–1974), co-starring her real-life stepson David Cassidy.