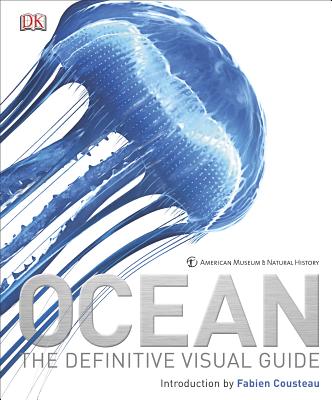 
Hard to Find. This book may be unable to order.
Immense shoals of barracuda, forests of giant kelp, and the world’s largest volcano – these are just a few of the majestic sights in the world’s oceans.

Our seas are by far the largest habitat on Earth and are home to an astonishing 90 percent of the world’s biodiversity. Life itself began in the oceans and has proliferated to include innumerable numbers of marine species, from single-celled archaea to giant manta rays, sea turtles, and blue whales.

Ocean is your guide to this most mysterious part of the natural world. It explores the geography of the oceans, which includes volcanoes forming a "Ring of Fire", trenches 10 km (6 miles) deep, hydrothermal vents, ice shelves, and hundreds of sea mountains and even waterfalls.

This stunning and comprehensive book unveils how the underwater world operates: its tidal rhythms, currents, tsunamis, and typhoons. It also showcases some of the most beautiful and diverse marine flora, including seaweeds such as limey petticoats, giant kelp, and oyster thief, as well as coastal fish and marine creatures such as the lanternfish, adapted to live in the remotest part of the ocean’s depths.

Ocean captures the beauty and scientific complexity of this vital habitat and at a time when global warming poses a real threat, it is essential reading for everyone interested in marine conservation.
DK was founded in London in 1974 and is now the world's leading illustrated reference publisher and part of Penguin Random House, formed on July 1, 2013. DK publishes highly visual, photographic nonfiction for adults and children. DK produces content for consumers in over 87 countries and in 62 languages, with offices in Delhi, London, Melbourne, Munich, New York, and Toronto. DK's aim is to inform, enrich, and entertain readers of all ages, and everything DK publishes, whether print or digital, embodies the unique DK design approach. DK brings unrivalled clarity to a wide range of topics with a unique combination of words and pictures, put together to spectacular effect. We have a reputation for innovation in design for both print and digital products.   Our adult range spans travel, including the award-winning DK Eyewitness Travel Guides, history, science, nature, sport, gardening, cookery, and parenting. DK’s extensive children’s list showcases a fantastic store of information for children, toddlers, and babies. DK covers everything from animals and the human body, to homework help and craft activities, together with an impressive list of licensing titles, including the bestselling LEGO® books. DK acts as the parent company for Alpha Books, publisher of the Idiot's Guides series and Prima Games, video gaming publishers, as well as the award-winning travel publisher, Rough Guides.