Why I Left Goldman Sachs: A Wall Street Story (Hardcover) 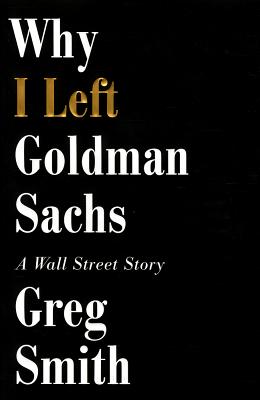 On March 14, 2012, more than three million people read Greg Smith's bombshell Op-Ed in the New York Times titled "Why I Am Leaving Goldman Sachs." The column immediately went viral, became a worldwide trending topic on Twitter, and drew passionate responses from former Fed chairman Paul Volcker, legendary General Electric CEO Jack Welch, and New York City mayor Mike Bloomberg. Mostly, though, it hit a nerve among the general public who question the role of Wall Street in society -- and the callous "take-the-money-and-run" mentality that brought the world economy to its knees a few short years ago. Smith now picks up where his Op-Ed left off.

His story begins in the summer of 2000, when an idealistic 21-year-old arrives as an intern at Goldman Sachs and learns about the firm's Business Principle #1: Our clients' interests always come first. This remains Smith's mantra as he rises from intern to analyst to sales trader, with clients controlling assets of more than a trillion dollars.

From the shenanigans of his summer internship during the technology bubble to Las Vegas hot tubs and the excesses of the real estate boom; from the career lifeline he received from an NFL Hall of Famer during the bear market to the day Warren Buffett came to save Goldman Sachs from extinction-Smith will take the reader on his personal journey through the firm, and bring us inside the world's most powerful bank.

Smith describes in page-turning detail how the most storied investment bank on Wall Street went from taking iconic companies like Ford, Sears, and Microsoft public to becoming a "vampire squid" that referred to its clients as "muppets" and paid the government a record half-billion dollars to settle SEC charges. He shows the evolution of Wall Street into an industry riddled with conflicts of interest and a profit-at-all-costs mentality: a perfectly rigged game at the expense of the economy and the society at large.

After conversations with nine Goldman Sachs partners over a twelve-month period proved fruitless, Smith came to believe that the only way the system would ever change was for an insider to finally speak out publicly. He walked away from his career and took matters into his own hands. This is his story.

Greg Smith resigned in the spring of 2012 as the head of Goldman Sachs's United States equity derivatives business in Europe, the Middle East, and Africa. Born and raised in Johannesburg, South Africa, Smith graduated from Stanford University and went to work for the firm full-time in 2001. He spent his first ten years in the New York headquarters before moving to London in 2011. He currently lives in New York City.

A portrait, in Proustian detail, of a world and a mentality that is utterly alien, and should be infuriating, to most of us on Main Street.


A personal tale of one person caught up in a wave of greed, betrayal, and a complete disregard for the standards that had made Goldman Sachs the most trusted name on Wall Street.

[Greg Smith] did what we would all hope that our own banker would do: he spoke out publicly about something that was wrong.


An insider's take on Goldman Sachs strikes a nerve....it provides a rare inside look into a career path to which many aspire: from nothing to Wall Street affluence. It will also be read because of its characterisation of Goldman's integrity. Where once it profited from helping clients prosper, the bank shifted, Mr Smith contends, into an entity that profited from clients.


...Smith has written a field guide to the culture of Goldman Sachs and a fly-on-the-wall account of Wall Street on the skids.


The author's personal account of the many facets of daily life at Goldman Sachs gives his memoir the power of persuasion and conviction.