A Little Chicken (Board Books) 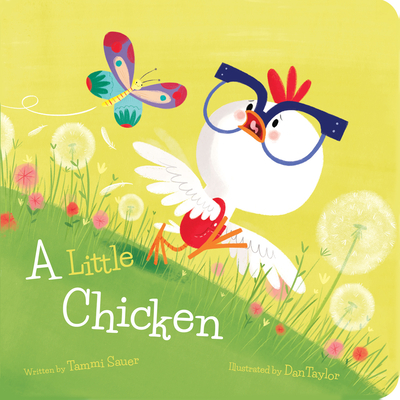 A Little Chicken (Board Books)

By Tammi Sauer, Dan Taylor (Illustrator)
List Price: $8.99
Our Price: $7.19
(Save: $1.80 20%)
On Our Shelves Now
Meet Dot: A small, fluffy chicken who happens to be . . . a little chicken. Will she find the courage within herself to save a chick in danger?
Dot is scared of lots of things: wolves, bears, the occasional lawn ornament. But when one of her mother's eggs rolls out of the nest, this nervous chick must find the courage to save the day--and her new sibling Perfect for any kid who needs a little encouragement to face the challenging world, this story proves that sometimes a big hero is just a little chicken.
Tammi Sauer is the author of many children's books, including Your Alien, which earned starred reviews from Publishers Weekly and Kirkus. She's an active blogger and is highly involved in the children's writer community. Tammi has worked as a teacher and library media specialist and now lives in Oklahoma with her husband and their two children. Her local indie bookstore, Best of Books, in Edmond, OK, has named July 9 Tammi Sauer Day. Learn more at tammisauer.com and on Twitter at @SauerTammi. Dan was born in Staffordshire, England, and studied art and illustration, graduating with a degree in visual communication. He has worked with a variety of publishers, including Simon & Schuster, Usborne, Campbell Books, and Scholastic. Dan is the illustrator of Tammi Sauer's But the Bear Came Back (Sterling). He lives in the UK. Learn more at dantaylorillustration.co.uk.