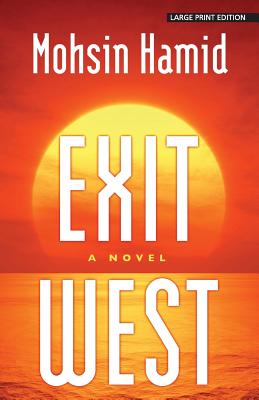 Pakistani author Mohsin Hamid is the bestselling author of novels and essays, among them the revered novel, “The Reluctant Fundamentalist.”  His latest book “Exit West” is a book you should read now.  I have not been this emotionally moved by a book in years.

Exit West is essentially a love story.  It opens in a city described as “swollen by refugees but still mostly at peace or at least not yet openly at war.”  Nadia and Saeed escape the city and Saeed’s father.  They travel first to Greece, then London, living in squalid camps, having only each other among the masses of displaced people, waiting for what the future shows.  Finally, they are in San Francisco where housing is reserved for the moneyed class and the world moves forward in a rapid trajectory.  Each place shows them new versions of themselves. As Hamid observes “the shades we reflect depend much on what is around us.”

After 50 years Nadia is back in the unnamed city and observes: “she was feeling she was a small plant in a small patch of soil, held between the rocks of a dry and windy place, and she was not wanted by the world, and here she was at least known...and that was a blessing.”

“Exit West” is an intoxicating epic of slender build. The writing is spare and sometimes reads like gospel.   By the end of this brilliant book about assimilation and the permanence and impermanence of our lives, I was in tears and had to sit still for a bit to reflect. This timeless and timely love story is one we need; right now and forever.

“Exit West will take your breath away as it magically weaves together a story of falling in love while the world falls apart. Spirited Nadia captures the heart of the thoughtful Saeed, but as their different paths in life converge, ordinary life gives way to the insults of war. Mohsin Hamid conveys the story of these young refugees with tenderness, humanizing the horrors that we too often see as merely headlines. As chaos touches so many lives around the globe, Hamid writes eloquently of the beauty found in our struggle to survive. This is more than a timely story; this is a remarkable work of art.”
— Luisa Smith, Book Passage, Corte Madera, CA

“This slender and compulsively readable novel will be one of the most powerful and heartbreaking reads you will encounter. It’s a story of migration and love of all kinds while also being a lesson on empathy for people robbed of their basic rights and needs. Hamid’s prose is quiet yet commanding, delivering passages and scenes unlikely to leave your subconscious. Exit West is gorgeous, timely, and desperately needed.”
— Tarah Jennings, Mitzi's Books, Rapid City, SD