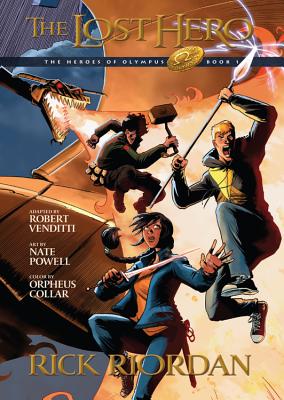 Jason has a problem. He doesn’t remember anything before waking up on a school bus holding hands with a girl. Apparently she’s his girlfriend Piper, his best friend is a kid named Leo, and they’re all students in the Wilderness School, a boarding school for “bad kids.” What he did to end up here, Jason has no idea--except that everything seems very wrong.

Leo has a way with tools. His new cabin at Camp Half-Blood is filled with them. Seriously, the place beats Wilderness School hands down, with its weapons training, monsters, and fine-looking girls. What’s troubling is the curse everyone keeps talking about, and that a camper’s gone missing. Weirdest of all, his bunkmates insist they are all--including Leo--related to a god.

Rick Riordan is the author of all the books in the New York Times #1 best-selling Percy Jackson and the Olympians series: The Lightning Thief,The Sea of Monsters,The Titan’s Curse,The Battle of the Labyrinth, and The Last Olympian. His other novels for children include the New York Times #1 best-selling series The Kane Chronicles (The Red Pyramid,The Throne of Fire, and The Serpent’s Shadow) and The Heroes of Olympus (The Lost Hero, The Son of Neptune, The Mark of Athena, and TheHouse of Hades). He lives in Boston, Massachusetts with his wife and two sons. Learn more at RickRiordan.com.


Nate Powell is a New York Times best-selling comic book artist/writer. He began self-publishing at age 14, and graduated from School of Visual Arts in 2000. His work includes the critically acclaimed Any Empire, Swallow Me Whole (Eisner Award winner for Best Graphic Novel, Los Angeles Times Book Prize finalist, and Ignatz Award winner), The Silence Of Our Friends, The Year Of The Beasts, and Sounds Of Your Name. He lives in Bloomington, Indiana with his wife and daughter. Visit him at seemybrotherdance.blogspot.com.
Orpheus Collar is a storyboard artist and illustrator who received his BFA from the Maryland Institute of Art. He has contributed his coloring skills to numerous titles, including The Amazing Spider-Man and Ultimate X-Men. Orpheus also provided the storyboards for The Lightning Thief, The Graphic Novel, and adapted and illustrated The Red Pyramid, The Graphic Novel. Orpheus lives in Los Angeles, California. Learn more at Orpheusartist.com.

PRAISE FOR THE LIGHTNING THIEF, THE GRAPHIC NOVEL

"Venditti takes the story of the half-blood Percy...and forges an adaptation that does justice not simply to Riordan's story but works perfectly as a graphic novel. The book retains the excellent pacing of the original and gives a face to Riordan's vision of the mythological made modern."—<EM>Publishers Weekly </EM>(starred review)

PRAISE FOR THE LOST HERO

"Riordan's storytelling is as polished as ever, brimming with wit, action, and heart—his devotees won't be disappointed."—<EM>Publishers Weekly</EM>

PRAISE FOR THE MARK OF ATHENA

"With a true storyteller’s sense of pacing, Riordan creates another compelling adventure, right down to the cliff-hanger at the end."—<EM>Booklist Online</EM>

PRAISE FOR THE SEA OF MONSTERS, THE GRAPHIC NOVEL

"Both high in quality and sure to be popular, this is a first purchase."—<EM>SLJ</EM>

"Son of Neptune is yet another absorbing and exciting addition to Riordan’s chronicles."—<EM>VOYA</EM>

PRAISE FOR THE TITAN'S CURSE, THE GRAPHIC NOVEL

"No fan will be able to turn this down."—<EM>Booklist</EM>