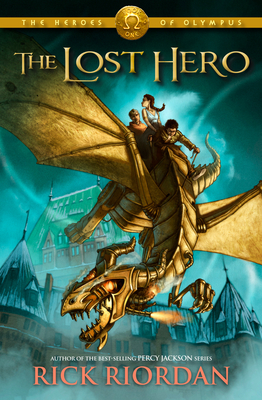 Rick Riordan, the best-selling author of the Percy Jackson series, pumps up the action and suspense in The Lost Hero, the first book in The Heroes of Olympus series.
"Riordan extends the franchise in a logical direction while maximizing the elements that made the first series so popular: irreverent heroes, plenty of tension-filled moments fighting monsters, and authentic classical mythology mixed in with modern life."--Horn BookJason has a problem. He doesn’t remember anything before waking up on a school bus holding hands with a girl. Apparently she’s his girlfriend Piper, his best friend is a kid named Leo, and they’re all students in the Wilderness School, a boarding school for “bad kids.” What he did to end up here, Jason has no idea—except that everything seems very wrong.

Leo has a way with tools. His new cabin at Camp Half-Blood is filled with them. Seriously, the place beats Wilderness School hands down, with its weapons training, monsters, and fine-looking girls. What’s troubling is the curse everyone keeps talking about, and that a camper’s gone missing. Weirdest of all, his bunkmates insist they are all—including Leo—related to a god.

Fans of demigods, prophecies, and quests will be left breathless--and panting for Book Two.

Rick Riordan, dubbed “storyteller of the gods” by Publishers Weekly, is the author of five #1 New York Times best-selling middle grade series with millions of copies sold throughout the world: Percy Jackson and the Olympians, The Heroes of Olympus, and the Trials of Apollo, based on Greek and Roman mythology; the Kane Chronicles, based on Ancient Egyptian mythology; and Magnus Chase and the Gods of Asgard, based on Norse mythology. Rick collaborated with illustrator John Rocco on two #1 New York Times best-selling collections of Greek myths for the whole family: Percy Jackson’s Greek Gods and Percy Jackson’s Greek Heroes. Rick is also the publisher of an imprint at Disney-Hyperion, Rick Riordan Presents, dedicated to finding other authors of highly entertaining fiction based on world cultures and mythologies. He lives in Boston, Massachusetts with his wife and two sons. Follow him on Twitter at @RickRiordan.