The Invention of the Modern Dog: Breed and Blood in Victorian Britain (Animals) (Paperback) 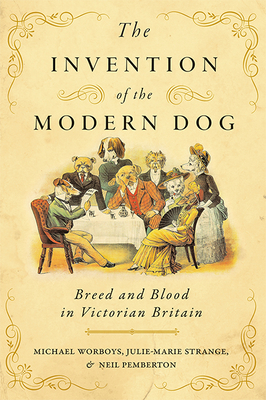 The Invention of the Modern Dog: Breed and Blood in Victorian Britain (Animals) (Paperback)


On Our Shelves Now
(This book is not returnable.)

The story of the thoroughly Victorian origins of dog breeds.

For centuries, different types of dogs were bred around the world for work, sport, or companionship. But it was not until Victorian times that breeders started to produce discrete, differentiated, standardized breeds.

In The Invention of the Modern Dog, Michael Worboys, Julie-Marie Strange, and Neil Pemberton explore when, where, why, and how Victorians invented the modern way of ordering and breeding dogs. Though talk of breed was common before this period in the context of livestock, the modern idea of a dog breed defined in terms of shape, size, coat, and color arose during the Victorian period in response to a burgeoning competitive dog show culture. The authors explain how breeders, exhibitors, and showmen borrowed ideas of inheritance and pure blood, as well as breeding practices of livestock, horse, poultry and other fancy breeders, and applied them to a species that was long thought about solely in terms of work and companionship.

The new dog breeds embodied and reflected key aspects of Victorian culture, and they quickly spread across the world, as some of Britain's top dogs were taken on stud tours or exported in a growing international trade. Connecting the emergence and development of certain dog breeds to both scientific understandings of race and blood as well as Britain's posture in a global empire, The Invention of the Modern Dog demonstrates that studying dog breeding cultures allows historians to better understand the complex social relationships of late-nineteenth-century Britain.