Mustard: A Treasure from Burgundy (Hardcover) 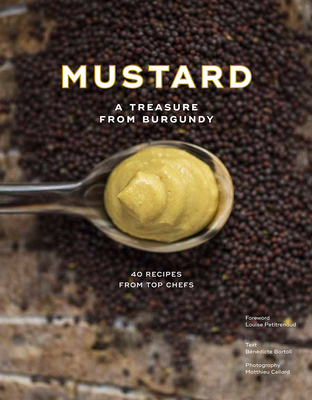 Mustard: A Treasure from Burgundy (Hardcover)


On Our Shelves Now
A celebration of Edmond Fallot, an iconic French mustard maker, including the history, recipes, and inspirational gastronomical uses of the popular spice

Crunched, crushed, mixed with other foods, then jarred, the mustard seed has come a long way. The Chinese grew the spicy more than 3,000 years ago, and ancient Egyptians, Greeks, and Romans used it to enhance the taste of meats and fishes. Over time, what was once called the “poor man’s spice” has become a staple ingredient right after salt and pepper.
Dedicated to Edmond Fallot, a famous French mustard maker, this book dives into the spice’s history, production, properties, and uses. Fallot has developed countless recipes over several generations—mustard with blackcurrants, with Espelette or black chile peppers, with Dijon gingerbread, and more—and continues an artisanal production rooted in the terroir of the historical French territory of Burgundy. With 40 new recipes from a group of renowned chefs and Fallot users, Mustard will inspire chefs and foodies with this essential element of gastronomy.

An editor specializing in gastronomy and trained in enology and a certified cook, Bénédicte Bortoli has held editorial positions for large publishers such as Fleurus and Albin Michel before becoming an editorial and culinary consulting freelancer. She is the author of Terre de Poivres, published by Éditions de La Martinière (2017). A culinary photographer based in the capital of the Gauls, Matthieu Cellard is known for his pictures of restaurant rooms. When he is not shooting photographs for regional or specialty magazines, he works for famous restaurants. He is a prominent photographer in the world of gastronomy.