The Stuff Between the Stars: How Vera Rubin Discovered Most of the Universe (Hardcover) 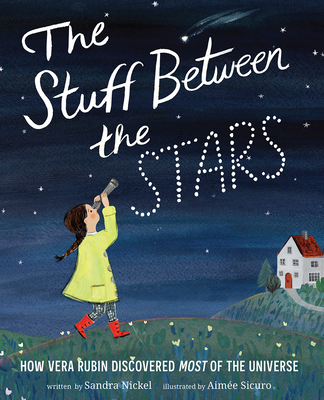 The Stuff Between the Stars: How Vera Rubin Discovered Most of the Universe (Hardcover)

Vera Rubin was one of the astronomers who discovered and named dark matter, the thing that keeps the universe hanging together. Throughout her career she was never taken seriously as a scientist because she was one of the only female astronomers at that time, but she didn’t let that stop her. She made groundbreaking and incredibly significant discoveries that scientists have only recently been able to really appreciate—and she changed the way that we look at the universe. A stunning portrait of a little-known trailblazer, The Stuff Between the Stars tells Vera’s story and inspires the youngest readers who are just starting to look up at the stars.

Sandra Nickel is a former New York City lawyer who now lives with her family in Switzerland. She is a graduate of the Vermont College of Fine Arts with a master of fine arts in writing for children and young adults. Helena Perez Garcia is a Spanish illustrator whose work has appeared in magazines, newspapers, and books around the world. Her clients include Penguin Random House, The Body Shop, Tate Publishing, and Reader’s Digest, among many others. She currently lives and works in Madrid.

Aimee Sicuro is an illustrator, picture-book maker, and surface-pattern designer. She graduated from Columbus College of Art and Design with a BFA in illustration. She lives in Brooklyn.

"A truly beautiful story of perseverance and passion."
— Booklist

"Straightforward and accessible. Whether representing Rubin’s thoughts or a winter snowstorm, striking watercolors repeat concentric circles and curves, suggesting images of swirling galaxies, the very subject that prompts Rubin’s work. Sicuro solves the problem of depicting dark matter by gloriously representing it as if seen through a spectrometer, like 'glitter caught in an invisible halo.'"
— The Horn Book Magazine

"This engaging biography will appeal to budding scientists, particularly those with a penchant for sky searching."
— Kirkus Reviews

"Readers will be inspired by the vastness of the universe as they learn about Rubin’s discoveries."
— School Library Journal