The Sea and Civilization: A Maritime History of the World (Hardcover) 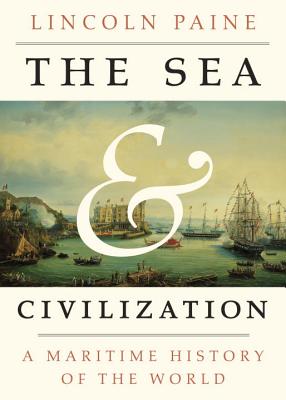 A monumental retelling of world history through the lens of maritime enterprise, revealing in breathtaking depth how people first came into contact with one another by ocean and river, lake and stream, and how goods, languages, religions, and entire cultures spread across and along the world's waterways, bringing together civilizations and defining what makes us most human.
Lincoln Paine takes us back to the origins of long-distance migration by sea with our ancestors first forays from Africa and Eurasia to Australia and the Americas. He demonstrates the critical role of maritime trade to the civilizations of ancient Egypt, Mesopotamia, and the Indus Valley. He reacquaints us with the great seafaring cultures of antiquity like those of the Phoenicians and Greeks, as well as those of India and Southeast and East Asia, who parlayed their navigational skills, shipbuilding techniques, and commercial acumen to establish thriving overseas colonies and trade routes in the centuries leading up to the age of European expansion. And finally, his narrative traces how commercial shipping and naval warfare brought about the enormous demographic, cultural, and political changes that have globalized the world throughout the post Cold War era.
This tremendously readable intellectual adventure shows us the world in a new light, in which the sea reigns supreme. We find out how a once-enslaved East African king brought Islam to his people, what the American sail-around territories were, and what the Song Dynasty did with twenty-wheel, human-powered paddleboats with twenty paddle wheels and up to three hundred crew. Above all, Paine makes clear how the rise and fall of civilizations can be linked to the sea. An accomplishment of both great sweep and illuminating detail, The Sea and Civilization is a stunning work of history.

Lincoln Paine is the author of four books and more than fifty articles, reviews, and lectures on various aspects of maritime history. He lives in Portland, Maine, with his wife, Allison.

"Elegantly written and encyclopedic in scope, with an expert grasp of the demands of seamanship in every age, The Sea and Civilization deserves a wide readership. For landlocked historians, it will be a powerful stimulus to dip their toes—and perhaps their pens—in saltwater and for readers a forceful reminder that the urge to "go down to the sea in ships" has shaped civilizations and cultures in every period and in every part of the globe."

"A magnificently sweeping world history that takes us from the people of Oceania and concludes with the container. In contrast to most books on maritime history, the majority of The Sea and Civilisation covers the history of the world before Columbus sailed the ocean blue and at least as much of the narrative focuses on Asia as it does on Europe."

"Paine is full of such illuminating facts. . . [He] forestalls any western bias with excellent chapters on Asian expansion. . . 'The sea held no promise for slaves, coolies, indentured servants, or the dispossessed', Paine reminds us, and while it is 'fickle and unforgiving, it is a fragile environment susceptible to human depredation on a scale unimaginable to our ancestors'. And yet, whose heart does not sing out when they see the sea? Our last resort, it still holds its promise and its power."

"Herzog once remarked: 'The feeling crept over me that my work, my vision, is going to destroy me, and for a fleeting moment I let myself take a long, hard look at myself . . . to see whether my vision has not destroyed me already. I found it comforting to note that I was still breathing.' That same quality of an all-consuming vision oozes from Paine’s book. His passion is to tell the story of the sea. History is seldom written with that kind of passion today."

“Even though the Earth’s surface is 70% water, historical narratives are usually land-centered. Paine (Ships of the World) shifts emphasis from land to water in order to correct this imbalance, an approach that takes the reader through history via the seas . . . Paine’s highly detailed work encompasses a wide array of topics, from trade and the influence of the sea on warfare and political coalitions, to ship building techniques through the ages, to piracy and slavery.  . . . Paine has compiled an invaluable resource for salty dogs and land-lubbers alike.”

—Felipe Fernández-Armesto, author of Millennium: A History of the Last Thousand Years

“Paine deftly navigates the complexities of global culture to create an eminently readable account of mankind's relationship to the sea. Both profound and amusing, this will be a standard source for decades to come.”

“The Sea and Civilization presents a fresh look at the global past. Bringing to bear a formidable knowledge of ships and sails, winds and currents, navigation techniques and maritime law, Lincoln Paine offers a lively tour of world history as seen from the waterline. The result is a fascinating account, full of little-known episodes and novel insights. A major contribution.”

"'I want to change the way you see the world.' This brave ambition is brilliantly realized by Lincoln Paine in this single volume. Thoroughly researched, clearly argued, eminently accessible—we have at last a responsible and persuasive explanation of the inextricable connection between the ocean and world civilization."

"The Sea and Civilization meticulously and systematically reconstructs the maritime history of the world from diverse historic records, archaeology, contemporary travelogues, languages, literature, religious texts and folklore. . . In this book we get to see some of the beautiful and interesting plates without traversing the museums and libraries of the world. . . That oceans teach us, above all, about the unity of human existence on this planet seems to be the take away from The Sea and Civilization."