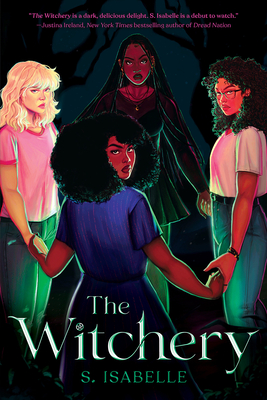 The Haunting Season is here and the Wolves are awake.

Haelsford, Florida, is a hellmouth. Or at least, that’s what Logan, a new witch struggling to control her powers, thinks when she arrives at Mesmortes Coven Academy. She is immediately taken under the wing of the infamous Red Three: Iris, a deathwitch, who wants nothing more than to break the town’s curse; Thalia, the talented greenwitch, on the run from her religious family and a past that still haunts her; and Jailah, one of the most extraordinary witches at the academy whose thirst for power may lead her down a dark path.

With the Haunting Season approaching, Wolves will soon rise from the swamp to kill, and the humans and witches must work together to survive the yearly onslaught. However, the history between humans and witches is long and bloodied, with the current truce hard-won and hanging in the balance. And this year, the stakes couldn’t be higher as two boys from Hammersmitt School prepare to make their first sacrifices to the witches in exchange for protection. But when students start turning up dead, Iris, Thalia, Jailah, and Logan realize they’ll have to harness their powers and stop the Wolves themselves. Yet old dangers lie in wait, and the cost to break the curse may be greater than any witch or human could ever know...

S. Isabelle is a reader, writer, and hoarder of books. After earning a Master’s degree in library science, she took that love of reading to youth librarianship. Her short story “Break” was featured in the anthology Foreshadow: Stories to Celebrate the Magic of Reading & Writing YA. The Witchery is her debut young adult novel. When she isn’t throwing books at teenagers, you can find her binge-watching TV shows, drinking heavily-sweetened coffee, or stressing over baseball. She can be found online at sisabellebooks.com.

Praise for The Witchery

“Meet your new favorite squad of witches! The Witchery by S. Isabelle is filled with dark magic, bewitching prose, and enchanting characters. It has everything I love in a book -- badass witches, a kiss of romance, and a touch of horror. Isabelle is powerful new voice in young adult fantasy and this is a debut you do not want to miss!” --Aiden Thomas, New York Times bestselling author of Cemetery Boys

"Isabelle expertly balances six alternating perspectives, each brimming with witty dialogue, light humor, and distinct personality that add levity to even the most harrowing events. Strong friendships and an immersive setting and atmosphere that simmers with fear and menace round out this spellbinding story of magical mayhem, whose protagonists are determined to come into their powers, whatever it takes." --Publishers Weekly

"Isabelle skillfully juggles six points of view, covering Thalia, Iris, Jailah, Logan, Mathew, and Trent, and the perspectives never feel like too much; each character has a complex history, differing relationships to magic, and conflicting goals, which both enhance the plot and keep the characters distinct. The story also offers multiple access points for a diverse audience, from a queernormative, Black-centric cast to the fantastical academy setting, while constant cliffhangers will keep readers anticipating the next return to their favorite characters." --BCCB