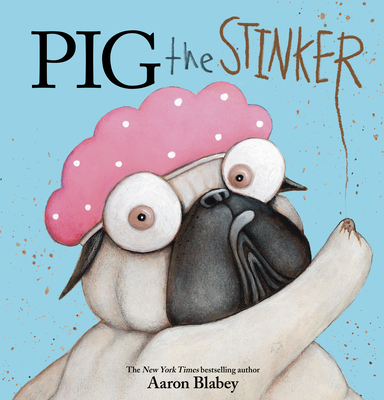 Pig the Pug and his best friend Trevor are back for another hilarious adventure in the bestselling series!
In this hilarious adventure, Pig the Pug STINKS! Pig likes to be smelly, so he rolls around in the garbage, laps up spoiled milk, tracks dirty paw prints all over the house, and even sticks his head in the toilet! But enough is enough! Pig's owner tries to get him to take a bath, but Pig refuses! Pig has a plan to stop up the tub, but when it backfires, will Pig get clean after all?

Rich with author-illustrator Aaron Blabey's signature rhyming text and unforgettable illustrations, Pig the Stinker is a laugh-out-loud story that teaches Pig -- and readers -- an important (and hilarious) lesson, just like in the five previous books in the series (Pig the Pug, Pig the Winner, Pig the Elf, Pig the Star, and Pig the Fibber).

Aaron Blabey has written many well-loved, best-selling books for children. He has around five million books in print and is the creator of three hugely successful series for children -- the New York Times bestselling The Bad Guys, Pig the Pug, and Thelma the Unicorn.


In 2018 it was announced that a movie adaptation of The Bad Guys is in development at DreamWorks Animation with Aaron serving as an Executive Producer on the project.

Praise for Pig the Winner:

"The goggle-eyed cartoon illustrations are fun, funny, and appealingly grotesque in their exaggerated goofiness, and they are a good match for the rhyming text." -- Kirkus Reviews


Praise for Pig the Pug: