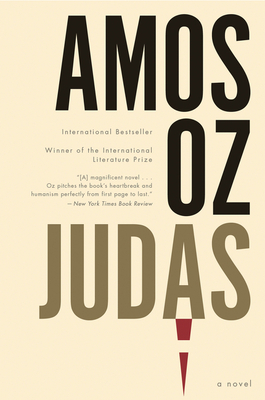 Winner of the International Literature Prize

“Scintillating . . . An old-fashioned novel of ideas that is strikingly and compellingly modern.” — Observer

Jerusalem, 1959. Shmuel Ash, a biblical scholar, is adrift in his young life when he finds work as a caregiver for a brilliant but cantankerous old man named Gershom Wald. There is, however, a third, mysterious presence in his new home. Atalia Abravanel, the daughter of a deceased Zionist leader, a beautiful woman in her forties, entrances young Shmuel even as she keeps him at a distance. Piece by piece, the old Jerusalem stone house, haunted by tragic history and now home to the three misfits and their intricate relationship, reveals its secrets.

At once an exquisite love story and a coming-of-age novel, an allegory for the state of Israel and for the biblical tale from which it draws its title, Judas is Amos Oz’s most powerful novel in decades.

“Oz has written one of the most triumphant novels of his career.” — Forward

AMOS OZ (1939 – 2018) was born in Jerusalem. He was the recipient of the Prix Femina, the Frankfurt Peace Prize, the Goethe Prize, the Primo Levi Prize, and the National Jewish Book Award, among other international honors. His work has been translated into forty-four languages.

NICHOLAS DE LANGE is a professor at the University of Cambridge and a renowned translator. He has translated Amos Oz’s work since the 1960s.

"[A] magnificent novel… Oz pitches the book's heartbreak and humanism perfectly from first page to last, as befits a writer who understands how vital a political role a novelist can play."—New York Times Book Review

"In this novel of nineteen-sixties Jerusalem, Shmuel Ash, lovelorn graduate student and lukewarm socialist, abandons his thesis ('Jewish Views of Jesus') to care for a frail, elderly Zionist living in a funeral villa. There he meets a cynical beauty who lost both her father and husband in the mid-century wars, backroom and battlefield, that defined the contours of Israeli statehood. The novel has a clear message; as Shmuel says, 'All the power in the world cannot transform someone who hates you into someone who likes you.' But Oz tempers this didactic edge by making Shmuel a hapless figure—with walking stick, inhalers, and baby-powdered beard—unimpressive to the aristocratic recluses he's stumbled among."—The New Yorker, "Briefly Noted"

"A novel of ideas...Beautifully translated by Nicholas de Lange."—New York Review of Books

"Even an annus horribilis can be redeemed if it contains a new Amos Oz novel."—The Forward

"An intellectual biography of Judas, a tender narrative of love and heartbreak, and a thoughtful consideration of the stakes and limits of Israeli politics.”—The Christian Century

"Oz’s prose, as captured in English by de Lange, illuminates an exquisite coming-of-age romance that also manages to comment on the origins of Zionism, the perception of the Israeli left and what it truly means to be a traitor."—Jewish Telegraphic Agency

"Like Oz's nonfiction "A Tale of Love and Darkness," "Judas" grapples with big, historical matters for which there are no simple answers: the founding of Israel and the founding of Christianity. Both remain rich subjects to explore today."—St. Louis Post-Dispatch, "Best Books of 2016"

"A scintillating novel...Many-layered, thought-provoking and – in its love story – delicate as a chrysalis, this is an old-fashioned novel of ideas that is strikingly and compellingly modern."—Observer

“Oz has written one of the most triumphant novels of his career.”—The Forward

“Judas is a vibrant specimen of a nearly extinct species, the novel of ideas...A fascinating coming-of-age story."—San Francisco Chronicle

"The novel gives a finely vivid and sympathetic picture of a Jerusalem (and an Israel) that has largely disappeared…This book is compassionate as well as painfully provocative, a contribution to some sort of deeper listening to the dissonances emerging from deep within the politics and theology of Israel and Palestine.”—New Statesman

“A masterpiece: command of the word, mastery of construct, the ability to stimulate all the senses of the reader.”—La Repubblica

“Challenging, complex and strangely compelling… The ideas at the novel’s centre have great vitality and force. The philosophical passages bristle with linguistic energy…vividly conveyed in Nicholas de Lange’s translation.”—Spectator

“JUDAS is a great novel that only Oz could have written…perhaps his finest work. Whether or not it is his swansong, it should win Amos Oz the ultimate accolade.”—Standpoint Magazine

"After almost two dozen books that track changes in both heart and state with untiring strength and subtlety, the Israeli master has delivered one of the boldest of all his works...Nicholas de Lange, Oz's distinguished translator, steers these virtuoso transitions between debate and domesticity with unerring skill...Oz can imagine, and inhabit, treachery of every stripe. But he keeps faith with the art of fiction."—Financial Times

"[It is] rich in material to grapple with. Oz engages with urgent questions while retaining his right as a novelist to fight shy of answers: it's a mark of his achievement that the result isn't frustrating but tantalising."—Daily Telegraph

"Earnestly bedded in Israeli history and politics, Oz's novel fights to suggest that sometimes the so-called traitors might be heroes."—Sunday Times

"Mingling with compassion and provocation as Oz explores betrayal, war and desire…He’ll no doubt be overlooked for the Nobel Prize yet again next month – this novel shows just how ludicrous that is."—Mail on Sunday

"Through the story of one young man at a crossroads, Oz presents thought-provoking ideas about traitors, a moving lament for the cost of Israeli-Arab conflict, and a heartfelt call for compassion."—Publishers Weekly

"Oz  widely considered Israel's greatest living writer...is the equal of Kundera in depicting the kind of love that is accompanied more by sighs of impatience and reproval than of desire satisfied. Lovely, though with a doleful view of the possibilities of peace, love, and understanding, whether among nations or within households."—Kirkus