Why?: A Conversation about Race (Hardcover) 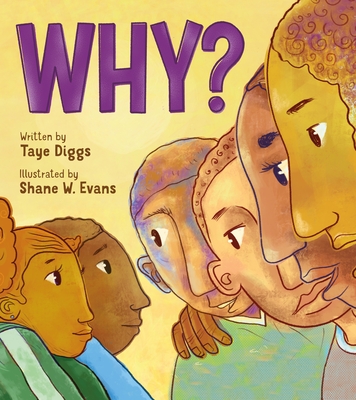 Why?: A Conversation about Race (Hardcover)

A conversation about race.

Why? is a question asked by children daily, and in this stirking and timely story, it begins a straightforwardand challenging conversation between children of color and the adults in their lives.

Why are the buildings burning? Why are people marching? Why are they crying? Taye Diggs has written a beautiful, powerful, and poignant story that peers through the eyes of a child as they struggle to understand why these events are happening.

Why? distills the conversations many children and adults are having about race, injustice, and anger in communities throughout our country, and gives them context that young readers can connect with. Heartfelt and deeply piercing illustrations from Shane W. Evans will leave a lasting impact on readers of any age. One that will hopefully lead to more conversations, change, and peace within our own communities and the world.

Taye Diggs is an actor whose credits include motion pictures (How Stella Got Her Groove Back and Chicago), stage (Rent, Wicked), and television (Private Practice). He lives in Los Angeles and New York City with his wife, the actress Idina Menzel, and their son.

Shane W. Evans studied at Syracuse University School of Visual and Performing Arts and graduated in 1993 and began traveling the world. In addition to contract work in illustration, graphic design and web design for major companies, Evans has conceptualized and illustrated numerous children’s books. Many of the books have been featured in the media such as The Oprah Winfrey Show, The Today Show, NBA Inside Stuff, Reading Rainbow and Late Night with David Letterman. Shane has received much acclaim within the children’s literary field for his work on children’s books such as "Osceola," "The Way The Door Closes," "Shaq and the Beanstalk" and "Take It To The Hoop Magic Johnson." His accolades range from being honored by First Lady Laura Bush at the 2002 National Book Festival, The Boston Globe-Horn Book Award and The Orbis Pictus Award for Outstanding Non-Fiction for Children.